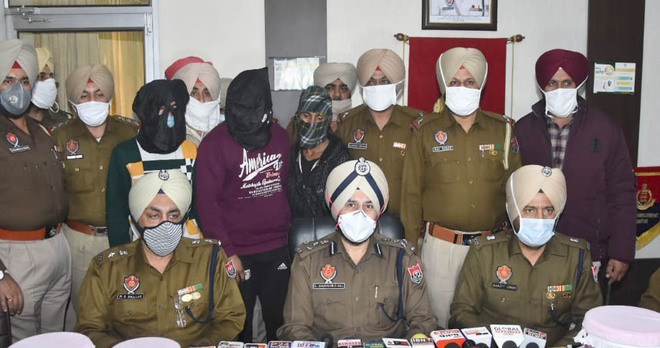 With the arrest of three persons here on Friday, the police cracked the robbery case in which a collection agent was looted three days ago. Two unknown armed persons had snatched Rs16 lakh from a salesman when he was going to deposit the amount in the bank on Tuesday.

Those arrested were identified as Raman Kumar of Gurbaxnagar, Raja, alias Tashan, of Chhota Haripura and Avinash, alias Eli, of Damganj area here. The police have recovered Rs13.83 lakh from their possession.

Gurmit Singh, a resident of Sultanwind area, works as a salesman at National Glass House Nirma Distributor located at Gin Bhushanpura. He said due to three holidays in banks on account of weekend and Gurpurb, he could not deposit the cash with the bank. He said on Tuesday he was on his way to the bank when two unidentified persons armed with sharp-edged weapons intercepted him and snatched his bag containing Rs16 lakh. A case under Sections 379-B and 34 of the IPC was registered with Division B police station here.

While addressing mediapersons, Police Commissioner Dr Sukhchain Singh Gill said Avinash, alias Eli, was the mastermind of the robbery. He had been working with the firm for the past three years. “It was him who connived with two other robbers and planned the robbery. He informed his accomplices about the movement of Gurmit Singh when the incident took place,” he said. He said Raja, alias Tashan, and Avinash Eli had two cases of quarrel and under the NDPS Act registered against them.

After the robbery, they divided the cash between them. The police recovered Rs 8 lakh from Raman Kumar, Rs 3.5 lakh from Raja and Rs 2.3 lakh from Avinash. The Police Commissioner said the accused were brought on production warrant and the remaining amount would be recovered. The police have confiscated the bike and the weapon used in the crime.