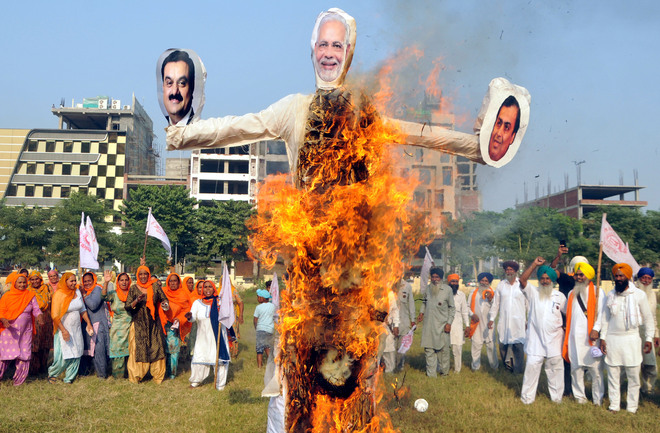 An effigy of Prime Minister Narendra Modi and businessmen Gautam Adani and Mukesh Ambani is set on fire during a protest by farmers at Ranjit Avenue in Amritsar on Friday. photo: Vishal kumar

Irked by BJP president JP Nadda’s remarks that middlemen and not farmers were behind the agitation against farm laws in Punjab, leaders of the Kisan Mazdoor Sangharsh Committee (KMSC) hurled a counter allegation against the Narendra Modi government for framing laws as per the diktats of the corporate houses.

Sarwan Singh Pandher, general secretary of the KMSC, said the BJP government at the Center was enacting laws at frenzied speed which were falling apart like pins. He recalled the outcome of the demonetisation and the GST. The traders being in minority had only opposed in a limited way before the implementation of the GST, he said and added that after over 1,000 amendments the GST had now woefully failed.

The KMSC spearheaded blockade of Amritsar-Delhi railway line at Devidaspura village on Friday.

Activists raised slogans demanding a roll back of the three agriculture legislations which were recently passed by Parliament.

Meanwhile, indefinite sit-in outside the residence of Rajya Sabha MP Shwait Malik continued with members of the Kirti Kisan Union, Azad Kisan Sangarsh Committee and Kisan Sangarsh Committee taking part in it. They raised slogans against the BJP leaders for withdrawal of all three laws on farming. The leaders stated that these laws would help business houses to do direct deals with farmers.