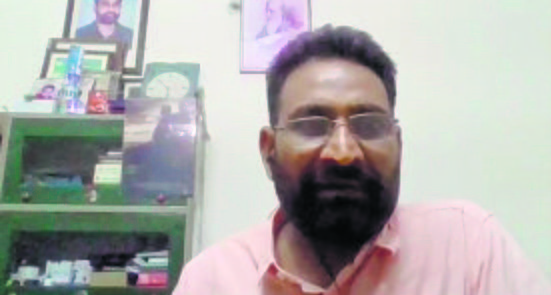 Noted Punjabi writer Gurmeet Karyalvi took part in an interactive web session with journalist and critic Nirupama Dutt. It was organised by the Majha House, in collaboration with the Prabha Khaitan Foundation. Under the literary initiative Aakhar, Karyalvi shared insights about his life and his work. Gurmeet said his tryst with the literature came when he was assigned the task of writing essays for his teacher. As he read what he was writing, he felt that this was what he could do easily.

“I found that I had many stories, personal experiences, inside of me waiting to just come out, and be put into words. I have faced discrimination; suffered the brunt of terrorism. So, I found that I just had to open the floodgates of my consciousness and the writer inside me took care of the rest and the stories just flowed,” shared Gurmeet. When Nirupama asked him about the writers and books that influenced him and inspired him to become a writer, Gurmeet cited Sohan Singh Seetal’s ‘Tootan Wala Khoo’ and Gurdial Singh’s ‘Marhi Da Deeva’. ‘Both these books are milestones in the annals of Punjabi literature as they are quite a departure from the usual, run-of-the-mill books written in those days. They are honest and realistic,” said Gurmeet.

Talking about the representation of Dalits and Sikhs in literature, Gurmeet said earlier Dalit Sikhs were very stereotypical characters, presented as addicts or buffoons. They were always the sidekicks, cast in a small role usually just to create humour. “But slowly this caricaturist approach changed over the years. It is heartening to see Dalit Sikh characters presented as the main character of the novel. These characters are realistic; their experiences and pains are realistic; you can relate to them and their experiences.”

Gurmeet said although he chose novel as his medium, he later improvised with short story writing and plays. “To my surprise, my story ‘Aatu Khoji’ was widely acclaimed; it was even selected in an anthology of Sahitya Academy Award winning stories. Even my first play received a standing ovation!’ he shared.

His latest novel ‘Oh Ikki Din’, Gurmeet said is based on his experiences during the pandemic. “My wife is a health worker and was assigned duty in a Covid ward. One day, I went to drop her to work and came across some patients, I observed them closely and found that their stories were very interesting. I scribbled down my ideas and showed them to my wife who liked it and encouraged it. This is how the novel took birth, which was warmly received by everyone,” said Gurmeet. Talking about the Dalit consciousness pervading through his novels, Gurmeet said it was only natural that this should be so. He also expressed regret and disappointment that novels and stories in the Punjabi language do not receive wide appreciation or audience.

‘India is proud of its players’, ‘never ever give up’ encouraging words flood twitter to cheer Hockey team