Awaz Mulazam Di, Sanjha Front did not take part in it 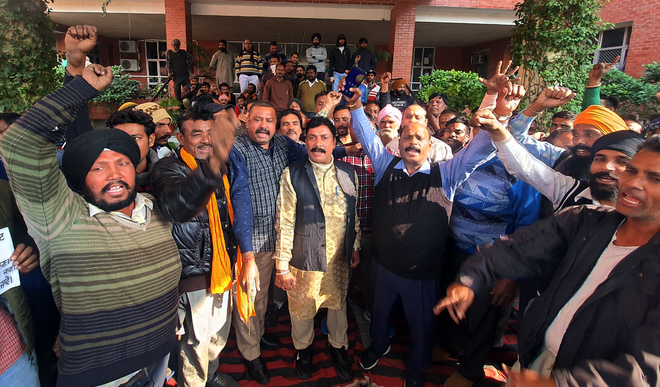 Members of the Punjab Federation Majdoor Safai Sewak went on an indefinite strike from today. The strike hardly affected sanitation work in the city as the Awaz Mulazam Di and the Sanjha Front did not participate in the protest and their members carried out cleaning and sweeping of roads in the city.

Bitta said safai karamcharis were being exploited as they were being denied even gazetted holidays. The government offered them 15-day additional salary in lieu of work performed during the gazetted holidays like on Independence, Republic Day and others. He said they turned down the offer saying that they must be paid one-month full salary.

Ashu Nahar, a leader of the Awaz Mulazam Di, stated as they did not declare the strike, their members did not take part in it. “Our demand of implementation of the pay commission has been implemented. We want part-time and contractual workers — engaged in the safai, street lights and sewerage work — should be given permanent jobs. But we do not want to pursue the path of agitation, which would cause inconvenience to city residents and tourists coming from all parts of the country and abroad.”

He accused the leaders resorting to agitation path of playing dirty politics through safai karamcharis. “This faction even did not participate in the state-level strike recently called over the demands of safai karamcharis. Now, they have suddenly become sensitive to the cause of class fourth employees,” he thundered.

Raj Kumar Raju, chairman, Awaz Mulazam Di, said the government should adopt pro-employee stance to resolve their problems and only then the latter would shun the path of agitation.