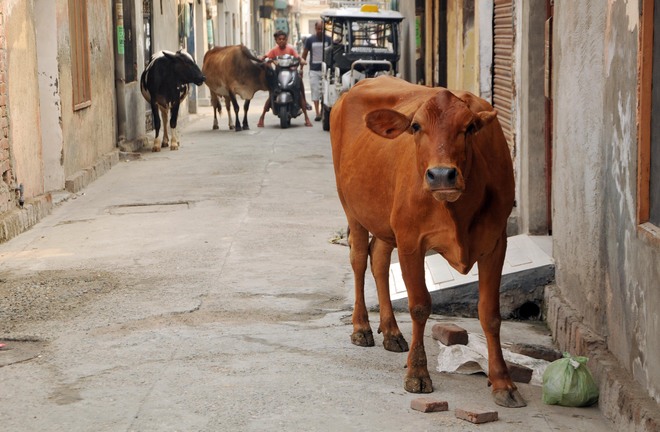 The MC has failed to provide any solution to the issue of stray cattle roaming on city streets. Tribune photo

Though the municipal authorities have been claiming to spend crores on development programmes, they have failed to provide any solution to the issue of stray cattle roaming on city roads and streets. Residents, who have been paying cow cess on electricity bill and purchase of liquor and automobiles, are a harried lot as the menace of stray cattle continues to haunt them.

The number of stray cattle has been increasing in the city. As male calves have been deserted by farmers in the village, they move to urban locations in search of food. Though the MC has not conducted any survey, officials claim that more than 3,500 stray cows flock the city roads. Stray cows feed on rotten vegetables thrown by sellers and often cause traffic snarls as while grazing on grass grown on dividers between roads. The animals cause traffic jams, besides accidents. Some furious bulls also attack the residents. Cows can be seen roaming in narrow streets in search of food and create nuisance.

A research conducted by traffic experts at Guru Nanak Dev University revealed that several major accidents have been reported due to stray cattle. Not only residents, even the cows are being killed in road accidents. A few weeks back some unidentified vehicle hit a cow to death at Putaligarh area. Similarly, another cow died on Majitha-Verka bypass in a road accident on last Sunday.

Despite directions by the state government, the Municipal Corporation and the district administration have failed to curb the menace.

The MC has a cattle shed with a capacity of 30 animals, which is insufficient. The proposed construction of gaushalas by district administration is still a distant dream. Meanwhile, the general house of Municipal Corporation also cleared the construction of two gaushalas with a capacity of head of 600 cattle in Naraingarh area last year but the project is still in a limbo. Though a large number of cow shelters are being run by religious organisations and private individuals, it has hardly brought any change in the situation.

Dr Ajay Kanwar, Municipal Health Officer, said tenders for the construction of cow shelter at Nariangarh area have been floated. “After constructing a boundary wall, we have started keeping the cattle there but the required infrastructure doesn’t exist,” he added.