Students shifted to govt medical colleges not being paid allowance 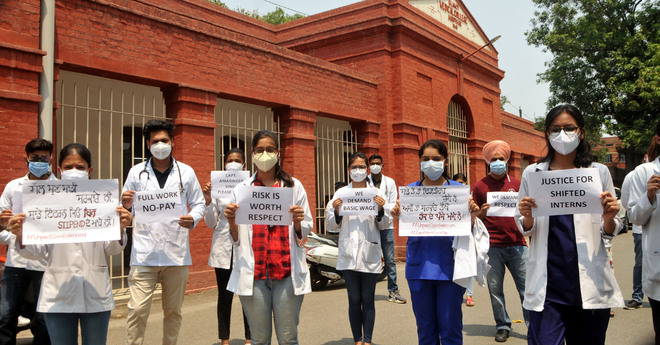 As Medical Education and Research Minister OP Soni along with other officials reached at the Government Medical College in Amritsar for a review meeting related to the Covid-19 management on Monday, MBBS interns staged a silent protest and demanded stipend.

Students who initially took admissions at Gian Sagar Medical College and Chintpurni Medical College were subsequently shifted to the Government Medical Colleges in the state affiliated with Baba Farid University of Health and Medical Sciences.

The Government Medical College in Amritsar has a total of 45 interns who were shifted from private colleges after they were closed. Recently, these MBBS interns had completed their course work and joined the mandatory internship programme.

While other MBBS interns get a stipend of Rs 15,000 per month as per the rules, these interns were being denied the same as they were shifted from other colleges.

The affected MBBS interns said they were actively attending duties in Covid wards and denying them the stipend was indiscrimination.

Meanwhile, a new oxygen storage tanker with a capacity to store 10 tonne liquid oxygen was being installed at the Government Medical College.

Soni said earlier, the college had a storage tank (liquid oxygen) of six tonne. He said the hospital has a daily demand of 18-19 tonne of oxygen. Soni added that now, the hospital would have to rely less on oxygen cylinders.

He said out of 320 patients admitted to the Government Medical College, 90 per cent were of Level-III category who require oxygen. He said the enhanced storage capacity would ensure regular oxygen supply to the patients.

Soni said beds for Covid-19 patients would also be increased by 25 per cent. He said 540 nurses would be recruited at the three medical colleges to do away with shortage of staff. The minister assured that the issue of the affected MBBS interns would also be taken up at the earliest.