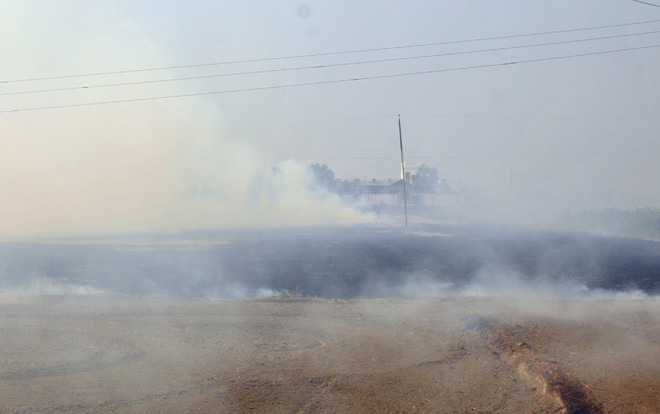 A fire at a paddy field on the outskirts of Amritsar. Photo: Vishal Kumar

As sporadic incidents of stubble-burning have been witnessed in Amritsar district, the administration has asked farmers to shun the practice.

The authorities said smoke from farm fires could create serious problems for Covid-19 patients as they can face trouble in breathing.

Amritsar Deputy Commissioner Gurpreet Singh Khaira said due to the prevalence of the Covid-19, smoke could result in aggravating health of positive patients.

A visit to rural areas revealed that stubble-burning has started in vegetable growing areas on the outskirts of the district where farmers are in a hurry to clear their fields after harvesting paddy. The Deputy Commissioner said farmers should go for in-situ management of crop residue and opt for machines provided by the government on subsidy.

He said farmers can use happy seeders for direct sowing of wheat without burning crop residue. He added that letting the stubble decompose in fields would enrich soil, which would decrease farmers’ cost on fertilisers.

Khaira said a total of 24 fire incidents have been noticed in the district with the help of remote sensing techniques. He said they can precisely identify those fields where stubble-burning takes place.

The administration is sending teams to all areas from where farm fires are reported, said Khaira adding that the Revenue Department has been instructed to mention the incidents in the revenue record of those farmers who are violating norms.

Though paddy procurement is expected to start from October 1, numerous vegetable growers have started harvesting as they are getting ready for sowing vegetables (potatoes and peas).

Farmers said allowing paddy stubble to decompose on its own requires time and if they do so, they would not be able to sow vegetable crops.