A hen-pecked babu deploys his staff to search for his wife’s beloved dog; an absent-minded surgeon suspects that he left his wrist watch inside a patient’s stomach; a professor fast-tracks a PhD scholar’s thesis so as to fix a match for his just-divorced sister-in-law. 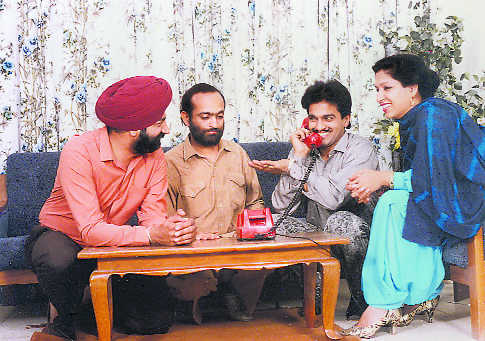 Jaspal Bhatti, Brijesh Ahuja, Vivek Shauq and Savita Bhatti in a still from Flop Show. Shauq passed away in 2011 due to post-surgical complications, while Bhatti died in a car crash next year during a promotional tour for son Jasraj’s debut film

A hen-pecked babu deploys his staff to search for his wife’s beloved dog; an absent-minded surgeon suspects that he left his wrist watch inside a patient’s stomach; a professor fast-tracks a PhD scholar’s thesis so as to fix a match for his just-divorced sister-in-law. Jaspal Bhatti’s Flop Show was hilarious, inventive and irreverent. It took nothing seriously, least of all itself. And it came at just the right time.

Back in early 1991, the national mood was downright gloomy. The country was facing its second Lok Sabha elections in two years, the Mandal Commission scars had not yet healed, and Punjab as well as Assam were grappling with gun-toting terrorists. The depressing air was dispelled for a while by this 10-part laugh riot. Doordarshan viewers had enjoyed comedy serials such as Yeh Jo Hai Zindagi, Kakaji Kahin and Mr Yogi, but Flop Show was a class apart. Each episode had a crazy plot of its own, taking potshots at bureaucrats, property sharks, doctors and whatnot. In the final episode, which mocked rich-but-dumb TV producers, Bhatti trained his satirical guns at DD itself — and got away with it!

The power-board engineer was lucky to have a battery of talented actors at his disposal, including Vivek Shauq, Kuldeep Sharma, Prem Kakaria, BN Sharma, Vinod Sharma, Rajesh Jolly, Neena Cheema, Arjuna Bhalla and Payal. Most of them had already acted on Jalandhar Doordarshan, but this was their big chance to go places on the national network.

Sadly, the show’s awesome twosome is not around to take us down the memory lane. Shauq passed away in 2011 due to post-surgical complications, while Bhatti died in a car crash next year during a promotional tour for son Jasraj’s debut film Power Cut.

Bhatti’s wife Savita fondly recalls, “The show got a prime-time slot, 9 pm on Thursday. The first part, on the misuse of government machinery, set the ball rolling. We went on to beat the Sunday evening feature film in TRPs.”

She remembers that during the telecast of the early episodes, Bhatti used to take a round of Chandigarh’s sectors to check out how many people were on the road rather than watching the serial at home. “The fewer he spotted, the merrier he became,” she says, tears welling up in her eyes.

Jalandhar-based actor Arjuna Bhalla just can’t forget the camaraderie during shooting. “It was like a family get-together on the sets. There were no ego clashes. Jokes were cracked freely, some of which made it to the script. Bhatti saab was open to ideas from anybody, right from actors to technicians and spot boys.”

BN Sharma, best known as Billu Bakra in Bhatti's Mahaul Theek Hai (1999), says he owes much of his success to the comic genius. “Going by my looks, he handpicked me for the roles of a clumsy thief or goonda in the serial. He was the master of one-liners and liberally distributed punchy lines among his actors.”

It’s a pity that Flop Show’s run stopped so soon. Why didn’t it get an extension despite its roaring success? “Jaspalji did send a proposal for 15 more episodes,” says Savita. “But Doordarshan’s red tape came in the way. Several issues remained unresolved, including expanding the budget.”

Bhatti subsequently made sitcoms (Full Tension, Prof Money Plant) as well as movies (Mahaul Theek Hai, Jijaji, Power Cut), but Flop Show was arguably his greatest achievement. In the episode on fake medical bills, he even poked fun at his own death. Almost four years after his death, his masterly creation lives on, losing none of its ‘Ulta Pulta’ relevance.

Jaspal Bhatti felt that the common man’s tough life was nothing but a ‘flop show’. That’s how he came up with the title.

The title song was shot at the Rock Garden, all through a biting cold night, because the venue was not available next day.

The entire serial, which had a budget of Rs 20 lakh, was shot in Chandigarh, particularly the Bhattis’ Sector-19 residence and Punjab Engineering College, of which the master satirist was an alumnus.

The dead-serious dedication (Samarpan) at the start of each episode was in the voice of Vijay Vashisht, a noted All India Radio announcer.

Wikipedia’s wrong. The serial was first telecast in 1991 (March-May), not 1989. It has had several re-runs and is currently on air again on Doordarshan.

First-timer Savita Bhatti was not the automatic choice as Jaspal’s on-screen wife. He auditioned several actors for the part, but found none suitable. Eventually, it was Vivek Shauq who convinced him to go for his real-life better half.

“Flop Show’s humour was never malicious. We laid bare the rot in the system, but without offending anybody.” — Savita Bhatti, Jaspal Bhatti’s wife