KARNAL: The high consumption of potable water and falling water table have become major challenges for the city as both factors are resulting in making Karnal block a dark zone. 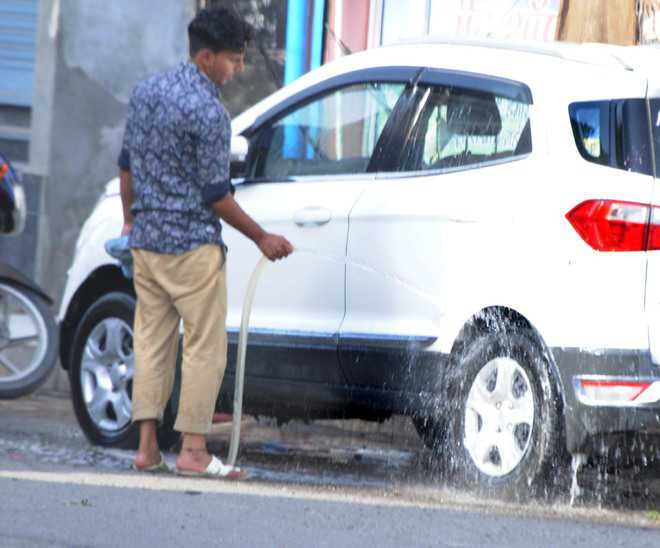 A youth washes a car using a hosepipe in Karnal on Wednesday. Tribune photo: Sayeed Ahmed

The high consumption of potable water and falling water table have become major challenges for the city as both factors are resulting in making Karnal block a dark zone.

In Karnal city alone, excluding unauthorised colonies, residents are consuming around 7 crore litres of water per day against the demand of around 5 crore litres per day. There are a lot of illegal connections around the city too that draw huge amounts of water, leading to a sharp decline in the water table.

In the city, people continue to waste water on washing their cars and on their gardens even as the authorities claim that they are taking action against such wastage.

Dharamvir Singh, XEN, Haryana Shehri Vikas Pradhikaran (HSVP) said teams had been constituted in each sector to monitor the wastage of water, whether it was for washing cars, gardening or household chores. “We serve notices on the violators and also issue warning to them,” he added.

The water usage figures came to light in a reply to an RTI query filed by activist Rajesh Sharma, who sought information on the supply of water from tubewells of the HSVP and Municipal Corporation areas.

The reply says there are 193 tubewells under both departments, supplying 7.04 crore litres of water per day in the city.

SP Joshi, XEN, Water Supplies, said that the water demand per person per day was considered to be 135 litres in the city area.

Rajesh Sharma said that with around 3.75 lakh population in the Municipal Corporation area, the demand of water was around 5 crore litres per day but the city was consuming 7crore litres per day, showing that neither the authorities nor the residents were serious about saving water.

The falling water table has made Karnal block a dark zone. Aditya Dabas, Deputy Director, Agriculture, said an area was termed dark zone when the ground water was overexploited.

In the city, people continue to waste water on washing their cars and on their gardens even as the authorities concerned claim that they are taking action against such wastage.