NEW DELHI:India and France have agreed to widen defence-related official as well as operational-level interactions. 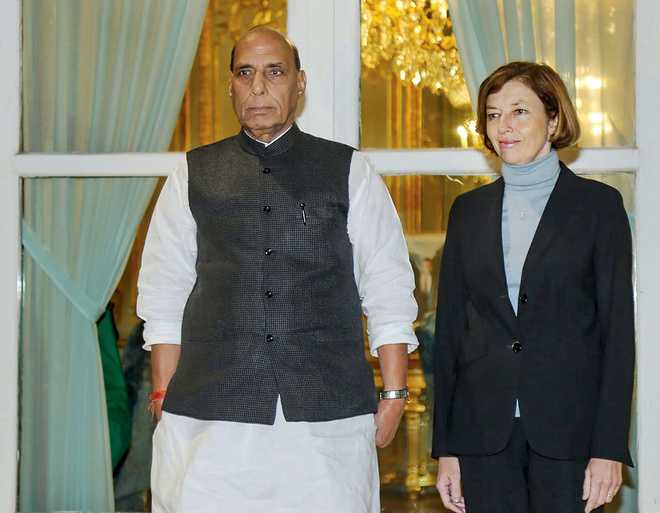 India and France have agreed to widen defence-related official as well as operational-level interactions. The two nations agreed to expand the scope and complexity of the existing regular bilateral joint exercises named Shakti, Varuna and Garuda.

Defence Minister Rajnath Singh, currently on a visit to France, held the second India-France ministerial-level annual defence dialogue with his French counterpart, Minister for the Armed Forces Florence Parly, in Paris, a statement of the Ministry of Defence said.

During the dialogue held in Paris, the two ministers comprehensively reviewed the entire gamut of bilateral defence cooperation, which is a key pillar of India-France strategic partnership. They also exchanged views on contemporary regional and international developments of mutual interest. Recognising that India-France partnership in the Indian Ocean region is crucial for preserving and promoting the common strategic and security interests, the two ministers noted the continuing implementation of actions outlined in the “Joint Strategic Vision of India-France Cooperation in the Indian Ocean Region” (March 2018). The ministers also reaffirmed the strong intention of the two sides to further deepen bilateral cooperation on counterterrorism.

Singh yesterday attended a ceremony for the handing over of the first of the 36 Rafale jets being acquired by India. The Indian delegation included Defence Secretary Ajay Kumar, senior officials from the Ministry of Defence and the three Services.

Addressing a delegation of CEOs representing some of France’s leading defence industry majors, Rajnath Singh said India is open to further tax rationalisation that may be required to encourage the ‘Make in India’ initiative in the sector

The minister also highlighted the recent cut in corporate tax rate as well as the steps taken to improve the ease of doing business in India. “We have undertaken significant economic reforms to open up the economy for investments,” he said