CHANDIGARH: If Punjab Chief Minister Capt Amarinder Singh snubbed local bodies minister Navjot Singh Sidhu over the latter’s decision to visit Pakistan for the foundation laying ceremony of Kartarpur Sahib corridor, Sidhu—revelling in the fame that came with his initiative to get the corridor opened—has hit back. 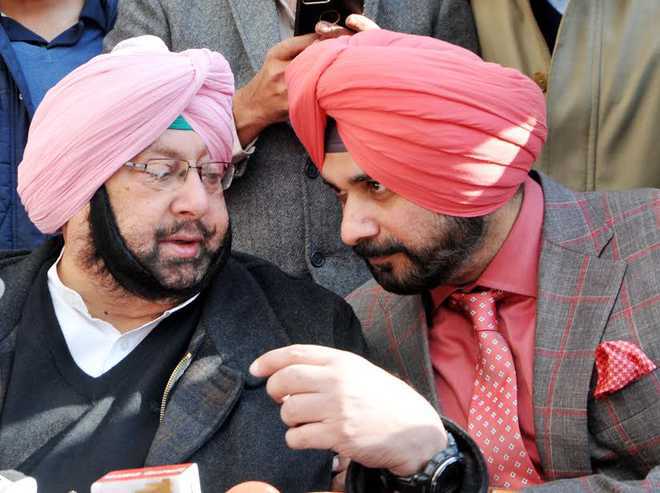 The cat’s out of the bag. The “internal battle” within the Punjab government is now out in the open.

If Punjab Chief Minister Capt Amarinder Singh snubbed local bodies minister Navjot Singh Sidhu over the latter’s decision to visit Pakistan for the foundation laying ceremony of Kartarpur Sahib corridor, Sidhu—revelling in the fame that came with his initiative to get the corridor opened—has hit back.

On a visit to Hyderabad, as part of the campaigning for Telangana polls, Sidhu when asked by reporters regarding the objections raised by Capt about his trip to Pakistan, asked: “Which Capt are you talking about? Oh... Capt Amarinder Singh? He is an army Captain. My Captain is Rahul Gandhi. His Captain too is Rahul Gandhi,” he said.

Buoyed by the massive public response he got for his role in getting the Kartarpur Sahib corridor opened at a time when Government of India was not willing to diplomatically dabble with Pakistan, Sidhu has hit out at the Chief Minister—rather, he refused to acknowledge Capt Amarinder as his boss. Not only that, he made it amply clear where he derives his power from (Rahul Gandhi). He also subtly reminded the chief minister who’s the boss in the Congress.

Sidhu also said on Friday that his decision to go to Pakistan was backed by Congress president Gandhi and other senior party leaders. Capt Amarinder Singh had turned down Pakistan’s invitation to the ground breaking ceremony for the Kartarpur Sahib corridor in Pakistan citing his loyalty to the Indian soldiers, but also asked Sidhu not to go. At the ground breaking ceremony of the Kartarpur Sahib corridor held in India at Dera Baba Nanak, Sidhu came to pay obeisance, but did not attend the function. At the same function, chief minister Capt Amarinder Singh launched a tirade against Pakistan army chief Qamar Javed Bajwa, which many in the Congress saw as an attempt to snub Sidhu.

Sidhu’s controversial hug with Gen Bajwa in August earlier this year too had led to many an attack on Sidhu from the chief minister’s camp.

Interestingly, many within Punjab Congress, including state Congress Chief Sunil Jakhar, have put their weight behind Sidhu after his “successful” Pakistan trip and the accolades he earned there.

It may be mentioned that this is not the first time that the relationship between Capt Amarinder Singh and Navjot Singh Sidhu has reached a flashpoint. The two have not been on the same page on many an occasion, including when the chief minister refused to give him sanction to proceed against the Badals’ cable business.