HP braveheart was sole earner in his family

DHARAMSALA: A pall of gloom descended on havildar Sanjeevan Singh Rana''s native Siyunh village near Shahpur, around 30 km from here, after the news broke that the 51-year-old had fallen to the bullets of the terrorists at the Pathankot Air Force station. 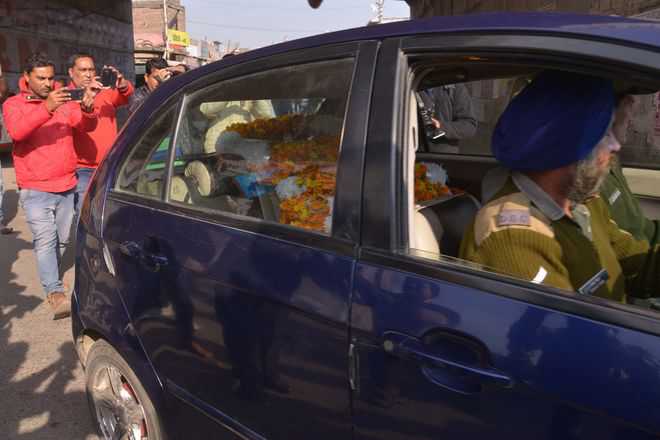 IAF personnel carry floral wreaths in a car to the Air Force base in Pathankot on Sunday. AFP

A pall of gloom descended on havildar Sanjeevan Singh Rana's native Siyunh village near Shahpur, around 30 km from here, after the news broke that the 51-year-old had fallen to the bullets of the terrorists at the Pathankot Air Force station. His family was inconsolable.

Employed with the Defence Security Corps (DSC), Sanjeevan was the sole earning member in his family.

Though his wife Pinki Devi was not in a position to speak, relatives present in the house said Sanjeevan was critically injured during the encounter with the terrorists.

He had received five bullet injuries in the chest and later died. His body would be brought to the village tomorrow.

Sanjeevan is survived by his wife, two daughters - Komal, a Class XII student and Shivani, pursuing BCA - and a son, Shubham, who is doing a B Pharma course. He has five sisters and his parents are no more.

Serving in the security forces has been a tradition with the family as Sanjeevan's father Rattan Rana too retired from the Army.

Sanjeevan had retired from the Dogra Regiment in 2009 and joined the DSC. He was transferred to Pathankot Air Base from Jammu two years ago.

Shahpur Congress leader and Himachal Pradesh Forest Corporation vice-president Kewal Singh Pathania has expressed grief over the death of the two soldiers from Himachal and has assured all possible help from the state government.

Sources said the other solider from Himachal who attained martyrdom during the encounter is Jagdish Chand from Chamba district. The body of Jagdish Chand would also be brought to his native village tomorrow.

Sources said Air Force's Kishori Lal, who belongs to Jaisinghpur area of Kangra district, was also injured in the attack.