While there are many reasons why India’s strong pitch led by Prime Minister Narendra Modi to join the Nuclear Suppliers Group was doomed to fail, two most important ones have not received attention. 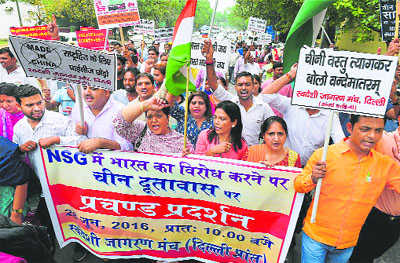 MISPLACED ANGER: Members of Swadeshi Jagaran Manch protest outside the Chinese Embassy in New Delhi after China did not support India's bid for NSG membership. PTI

While there are many reasons why India’s strong pitch led by Prime Minister Narendra Modi to join the Nuclear Suppliers Group was doomed to fail, two most important ones have not received attention.

In the bid to salvage the bruised image of the Prime Minister, efforts are on to convey all is not lost. An unnamed US senior official has been quoted as saying that India’s case for membership is strong and should happen with some more push by December. Similarly, the outgoing chairperson of the NSG, Argentinian diplomat Rafael Grossi, has said that some way would be found to get India inside the NSG conclave. The key question remains whether India would get benefits as NSG member befitting a nuclear-weapon state?

The first reason why this will not happen is that the US, and not China, had dashed all hopes of India doing trade in nuclear technologies with NSG members. In 2007, when President George Bush was pushing India’s case for exemption from the global restrictive regimes and in the US Congress as agreed in the 2005 Indo-US framework document, the US, under its global commitment, was also urging the NSG to review its export control rules to check proliferation. Thus, in July 2011, the NSG announced its new export norms: only those nations which had signed the NPT would be eligible for reprocessing and enrichment (ENR) technologies. This came as a bombshell for India. While allowed to trade for fuel with the NSG, India would be denied ENR technologies needed for utilisation of closed fuel cycle because it had not signed the NPT.

In simple terms, while India could buy nuclear fuel from the world, it could not use it fully as without ENR technologies it would be unable to use the nuclear waste for energy production. This was when Indian scientists protested that they had own limited reprocessing capabilities and were not entirely bereft of them.

The second reason is that Modi’s India has displeased Beijing no end by pitting itself as a leading power in Asia, rivalling China, which it is not. It has forgotten that China had rejected the US’ G-2 (Group of Two) proposal for global power sharing and had instead sought the new major power relationship, a move that moved the US pivot to Asia since it signalled the race for global supremacy. The G2 system was informally proposed in January 2009. It was soon endorsed by the Obama administration.

However, China was not impressed as it had other plans. During Obama’s China visit in November 2009, Chinese Premier Wen Jiabao told him that China preferred a multipolar world. What he did not say was that China aimed to displace the US as the global power in the 21st century. This task was left for Chinese leader Xi Jinping, who, heading its fifth-generation leadership, sought the new major power relationship with the US in December 2012.

Also little understood is that Pakistan is no longer China’s lackey. Since Chinese President Xi Jinping’s 2013 announcement of the China-Pakistan Economic Corridor as the flagship of his ambitious Belt and Road project (the Silk Road Economic Belt and the 21st-century Maritime Silk Road), Pakistan has emerged as China’s critical partner on the global chessboard. China believes that success of the CPEC would convince the world to jump on the Belt and Road bandwagon to help Beijing create alternative security architecture in Asia, the gateway to a new global order.

Given this, China can hardly be blamed for India’s short-sightedness and little understanding of strategic imperatives. Beijing opposed Delhi’s inclusion as NSG member not because it wants India to remain boxed in South Asia, but because it has reason to pull Pakistan out of South Asia as well. If this truism had been grasped by the Modi dispensation, it would have realised that the NSG is not the high table it should seek (that remains the elusive membership of the UN Security Council).

Just like the 2008 Indo-US civil nuclear agreement, the NSG, from US’ perspective, was and remains fundamentally about non-proliferation. Unfortunately, the Manmohan Singh government sold the 2008 agreement as necessary for providing round-the-clock electricity to the people of India. The Modi government is now selling the NSG as the pathway to great power status. Both governments have been less than truthful. Regarding India’s quest for membership of the NSG — the club which works on consensus principle — China had in July 2015 made it clear that signing of the NPT would be essential for new member states. What China had left unsaid was that India could become NSG member only if it signed the NPT as a non-nuclear weapon state.

To understand the implications of India joining the NSG, it would be instructive to revisit the 2008 Indo-US agreement. According to it, India was to place certain numbers of its nuclear reactors under International Atomic Energy Agency safeguards. In return, the US promised to end India’s nuclear apartheid by acknowledging it as a nuclear weapons power, agreed to India getting access to high and dual-use technologies, and offered to cooperate on civilian nuclear energy to meet India’s energy demands.

It seemed that India would get the moon: it would become a nuclear weapons power (with freedom to maintain its credible minimum deterrence); be free to decide on more indigenous nuclear reactors for strategic purposes; be part of the global restricted technology cartels, namely, the NSG, Missile Technology Control Regime, Australia Group, and Wassenaar Arrangement (all led by the US but working by consensus); maintain strategic autonomy, implying independent foreign policy; not be clubbed with Pakistan; be free to buy nuclear fuel (uranium); run the nuclear closed fuel cycle (including reprocessing and subsequently the indigenous three-stage thorium cycle), and purchase state-of-the-art ENR technologies for its energy needs. It appeared to be a win-win situation for India.

In reality, from the US perspective, the deal was about non-proliferation by coercing India to identify maximum numbers of its reactors for civilian use, getting India to de facto sign the CTBT even when the US Senate had rejected it, getting India’s foreign policy closely aligned with that of the US, doing commerce in civil nuclear reactors and defence (through a 10-year Defence Framework signed separately but highlighted in the July 18, 2005, framework document), and eventually having India as a junior strategic partner if not junior ally in the Asia-Pacific region.

Against this backdrop, hypothetically speaking, if India becomes a member of the NSG, what would it get? It would certainly not get the ENR technologies that it desires from NSG member states. In any case, this is a bilateral issue. For example, China, an NSG member, continues to unabashedly give ENR technologies to Pakistan without even a mild protest from other NSG members, including the US.

On China, Indian diplomats incorrectly compare 2008 with 2016. At that time, China agreed to the US’ call to support India for two reasons: a strictly one-time waiver had been sought for India from the NSG to do nuclear commerce. And, China had yet not disclosed its grand China Dream with the Belt and Road as its manifestation to challenge US’ global supremacy. But China is now willing to discuss India’s entry into the NSG, provided Pakistan’s is also considered.

The reasons for India and Pakistan seeking to join the NSG are different. Pakistan’s quest for the NSG membership is not about nuclear technologies trade but about maintaining strategic balance with India. India, on the other hand, wants to be in the proverbial NSG tent to be able to participate in its policy-making. Considering the NSG was created as the consequence of India’s 1974 nuclear test, it is unrealistic to expect the conclave to alter its NPT imperative to allow nuclear technologies trade with India.

The writer is editor, FORCE newsmagazine