MUKTSAR: The police today arrested Congress councillor Rakesh Chaudhary for his alleged involvement in the thrashing of a woman over non-repayment of loan here yesterday. 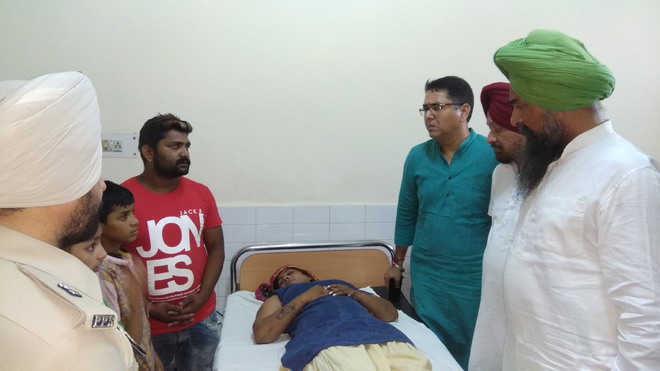 The police today arrested Congress councillor Rakesh Chaudhary for his alleged involvement in the thrashing of a woman over non-repayment of loan here yesterday.

Leaders of Opposition parties today visited the civil hospital here to know about the well-being of the victim, who was allegedly thrashed by some youngsters, including Chaudhary’s brothers. Those who visited the victim included SAD’s Muktsar district president and local MLA Kanwarjit Singh Rozy Barkandi, AAP MLAs Aman Arora and Kultar Singh Sandhwan and BSP state president Jasbir Singh. They offered legal assistance to the victim and to pay for her treatment.

Arora asked Chief Minister Capt Amarinder Singh to apologise to women for the incident. The AAP and BSP leaders alleged that the police were acting in a biased manner due to the involvement of a Congress leader.

Kiranpreet Kaur Dhami, a member of the Punjab State Women Commission, also met the victim and her family. The commission chairperson has already summoned the police on June 20.

In a viral video, some youngsters were seen mercilessly thrashing the victim, Meena Rani. They dragged her out from her house and kicked her in the stomach and chest, besides hitting her with a belt. They also allegedly thrashed her mother.

Mansi, victim’s mother, said, “We have repaid nearly Rs 2 lakh, including interest, to Chaudhary’s brother and just about Rs 23,000 is remaining. He along with others came to our residence yesterday and said if she couldn’t pay the money then she should come with them. When she objected, they thrashed her badly. We want strict action against them.” She alleged that former MLA Sukhdarshan Singh Marar was shielding the accused.

She said the video shot by Meena’s nine-year-old son helped them get an FIR registered against the accused.

Meanwhile, the police today produced all six accused arrested yesterday in a local court, which sent five of them — Roop Lal, Suresh, Sunny, Shekhu and Jambo — to two-day police remand and a woman, Guddi, to 14-day judicial custody. Those yet to be arrested are Rakesh Chaudhary, his wife Jyoti, Hasan (son of Sunny Chaudhary) and Renu (wife of Sunny Chaudhary).