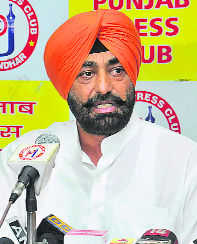 Rebel AAP leader Sukhpal Singh Khaira, who had floated his own political outfit — Punjab Ekta Party — earlier this year, today withdrew his resignation as MLA from the Punjab Vidhan Sabha.

Khaira sent a letter to Speaker Rana KP Singh saying that he was withdrawing his resignation submitted in April this year. The resignation was submitted weeks before the 2019 General Election in which Khaira had contested as a candidate of PEP from the Bathinda seat. He had stood a poor fourth, garnering just 37,854 votes.

In his letter to Speaker submitted today, Khaira has sought additional time to reply to the notice issued to him for violating the Representation of the People Act seeking his disqualification as an MLA after he had floated his own party. The petition was filed against him by Leader of Opposition Harpal Singh Cheema days after Khaira floated his own political outfit. Vidhan Sabha Secretary Shashi Lakhanpal Mishra confirmed having received his letter and said the decision to grant him additional time on the petition filed against him rested with the Speaker.

Talking to The Tribune, Khaira said, “Why should I leave my membership for Kejriwal and Company? They removed me undemocratically as Leader of Opposition. I will fight out the petition seeking my disqualification. The voters of Bholath do not want me to resign”.

The electoral setback Khaira suffered in Bathinda as well as the poor response to the Punjab Democratic Alliance of which PEP was a part has made it evident that there was little space for a formidable fourth front in the state’s political arena.

For Khaira the doors back to AAP have been shut. Cheema said, “He is an opportunist and realised that it will be the end of road for him if his resignation was accepted. We are again urging the Speaker to disqualify him as he had moved against his own party,” he said.

The SAD on Tuesday demanded immediate disqualification of Khaira and three other AAP legislators for leaving their parent party and forming new political formations. SAD spokesperson Daljit Singh Cheema claimed that the attempt by Khaira to backtrack from his resignation was unconstitutional and amounted to fraud.