An ongoing exhibition explores its many meanings — in lockdown and beyond 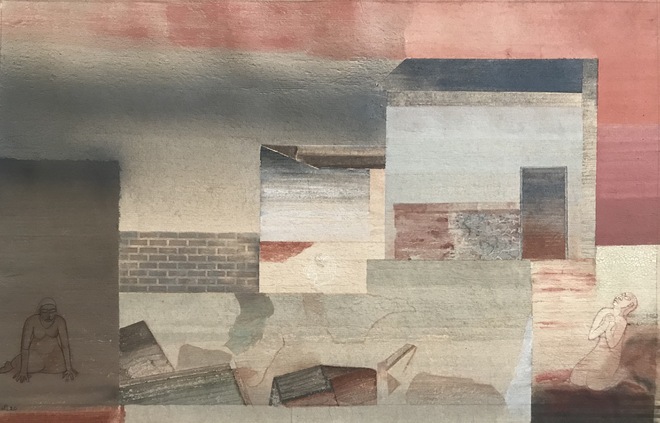 As the lockdown swooped down upon the world, the concept of ‘home’ came to be redefined. It was the place for both leisure and work; it was the place to be together, and lonely too. For many, home was a faraway dream, and they walked thousands of kilometres towards it.

As the morbidity of initial days made way for a new way of life, Tunty Chauhan, director of Threshold art gallery in Delhi, wondered how to engage artists. A talk with art critic Prayag Shukla, and they soon got artists toying with the idea of ‘Nest: Gharonda, Basera, Nid, Ghar’, the exhibition taking its name from the many synonyms of home.

On in Delhi till April 10, the participating artists include the likes of Rajendar Tiku, whose work has for long been an expression of his exile from Kashmir, his home; Nilima Sheikh, who has focussed on home and displacement in her five-decade career, and Sudhir Patwardhan, whose work has involved cities and the poor who dwell in them. Also on display are works by Anindita Bhattacharya, Jayashree Chakravarty, Manisha Gera Baswani, Pandit Khairnar, Pooja Iranna, Suneet Ghildial and Yashwant Deshmukh. Co-curators Shukla and Chauhan say the artists’ reactions have been beautiful and varied, including both figurative and non-figurative works. Chauhan says the lockdown made people think of home as a metaphysical space. “With no distractions, the artists poured their hearts out,” she says.

Patwardhan captures the essence of ‘solitary nesting’ in his works — men and women confined to their homes, trying to keep busy, but the aura of loneliness engulfing them is just unmissable. For Shukla, Patwardhan’s painting of a woman knitting is sheer beauty. “The woman seems to have become one with her shadow. It is like painting a shadow without painting one,” he says.

Always the one to comment on increasing urbanism, Iranna’s sculptures, created using staple pins and cement, explore the towering skyscrapers and high-rises that plague the urban landscape. “My work talks about life, emotions. It is about how fragile we are in a society,” she says. The emptiness of the buildings is perhaps her way of commenting on the habit of accumulating things not needed; things that fill our home, but not our lives.

In the images painted by Sheikh, who has been working on the theme of migrants, there is a sense of a certain displacement. There are fragments of a home (sometimes in dreams), elements of homelessness, a silent prayer pervading the canvas.

Chauhan says artists such as Tiku, Bhattacharya and Khairnar have dealt with the theme in a deeper form. Khairnar’s works have only a slight resemblance to a constructed home. The dense square in the middle seems like a window, perhaps to a home, or memories of a home somewhere.

Shukla says “home” is an eternal theme and the pandemic gave it a new meaning. “The idea that home is a place where one can return had turned into home being the place where one has to return. It does not matter at what time, at what juncture one examines the idea of home, it will always be relevant.”