A noisy anti-vaxxer movement tried to thwart trials of small-pox vaccine, illustrating its point through caricatures and cartoons 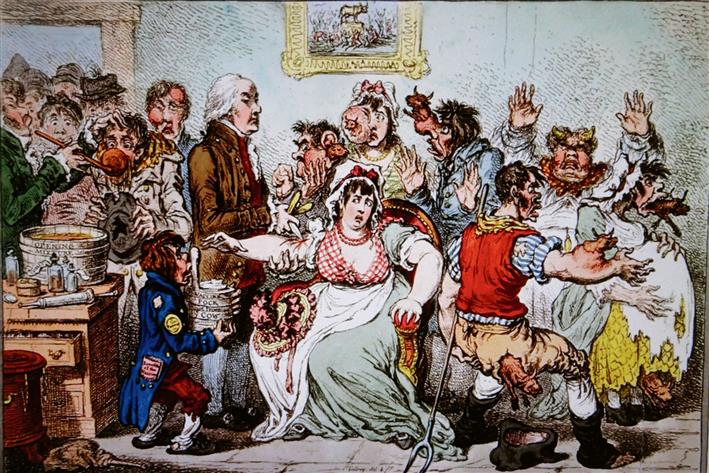 Caricature by James Gillray: ‘The Wonderful Effects of the New Inoculation’, 1803.

I shall endeavour still further to prosecute this inquiry (about the prevention and cure of small-pox), an inquiry I trust not merely speculative, but of sufficient moment to inspire the pleasing hope of its becoming essentially beneficial to mankind. — Edward Jenner

In science, credit goes to the man who convinces the world, not the man to whom the idea first occurs. — Francis Galton

It is nothing that I know much about. But I write, almost compulsively, against the background of the devastation that the virus — tentatively named ‘2019-nCoV’ — has brought to our entire world and is by no means gone yet. This piece is essentially about another virus that used to rage hundreds of years ago, causing millions to die every year or become scarred for life; the one we refer to simply as ‘small-pox’. That virus is now fortunately gone, all because of a vaccine: it has been wiped out so completely from the face of the earth that the last remaining specimens of it are held in just two laboratories, in Siberia and the USA. These samples, used exclusively for research — one gratefully learns — are placed under ‘higher security than a nuclear bomb’.

While so much is happening in our world and the spectre of death from Covid-19 still roams the streets of every village and every town, it is of profit to recall the story of the small-pox vaccine. For, it is a story as much about the development of the vaccine as about the hesitancy of acceptance that it faced. The story of the first vaccination ever has been told many times over and has grown into a legend: not believed in all its somewhat romantic detail by many, but in its essence true. One goes back to the year 1796 when Edward Jenner, a small-time country doctor practising at Berkeley in Gloucestershire, England, was consulted by a young milkmaid, Sarah Nelmes, about a rash on her hand. The doctor had generally observed that milkmaids working in the countryside around him had remarkably clear complexions and were never afflicted ‘by the scars of the feared disease ‘small-pox’. From observation, he had deduced that this was partly because most of them had contracted at some point of time or the other cow-pox — a condition which came from proximity to cows that grew some ‘boils’ which exuded some fluid — and it was this relatively mild condition which protected the girls from contracting small-pox, granting them some kind of immunity. Jenner questioned Sarah and she confirmed that one of her cows — Blossom is cited as the cow’s name — had recently had cow-pox. In an inspired moment of realisation, the doctor decided to test the protective properties of cow-pox. In 1798, he lanced a sore on Sarah’s hand and injected the resultant lymph into the arm of a young boy as an experiment. The boy became mildly ill with cow-pox but recovered quickly and even when infected, a bit later, with small-pox, did not develop the dreaded disease. Jenner knew that he was on to something. His theory was correct: this is how vaccination (I did not know but the term comes from vacca, the Latin word for a cow), was born.

As time passed, and Edward Jenner spoke to his patients and the public in a voice which was persuasive, not aggressive, acceptance of his great discovery grew. He came to be justly recognised as a saviour, he began to refer to himself as the ‘Vaccine Clerk to the World’; and honours homed in towards him from all directions. Within a year, the first mass trials of the small-pox vaccine were already underway. But the passage to that stage had not been easy. For, suddenly, in opposition to his method, there also grew up a noisy, raucous ‘anti-vaxxer’ movement. To his vaccine against small-pox began to be attributed the birth of ‘ox-faced children, elderly women sprouting horns, and cloven minds’: all with reference to the bovine origins of the vaccine. Leading the campaign against his discovery and method was a doctor, William Rowley by name, who attacked Jenner with viciousness, publishing cartoons and caricatures highlighting the effects of small-pox vaccination. “These,” he wrote in one of his many pamphlets, are “the diseases of beasts, filthy in their very nature and appearance, in the face, eyes, ears, (leading to) blindness and deafness, spreading their baneful influence over the whole body”. Another fierce opponent of Jenner’s discovery was Benjamin Moseley, who penned a tirade against the cow-pox derived vaccine in which he warned of its effects not only upon the body but also upon the mind.

Jenner was, however, not without supporters. The conflict between the two sides ‘began to play out in newspapers, in artwork, and even in the streets as both sides battled for the body and soul of Britain’. In this melee, caricaturists had a field day. James Gillray published in 1803 a caricature in which Jenner was shown poking a heartless needle into the arm of a seated woman, all around was a crowd of men and women showing calves coming out of the sides of men, women’s noses growing into weird shapes, and little dwarfs scurrying around with pans of cow-pox, as if peddling the fluid. There were cartoons in Paris also: a newspaper publishing in 1800 a sketch showing a milkmaid offering her hand for examination to Edward Jenner, half hidden by a massive cow, while a portly physician knelt on the ground tempting a dandy with inoculation. As against this, the proponents began to successfully point out that there were vested interests at work, for some people had major financial interest in stopping Jenner’s discovery catching on, resulting in their losing their lucrative practice of old-fashioned treatments of the disease.

That was a long, long time ago. But traces of hesitancy still linger, in this case in the context of the Covid vaccines. No fierce opposition may be in sight, but insidiously things are being said. Can we not see that, ignorance and mismanagement apart, Mammon, god of wealth, is at work, jealousies are doing their rounds, and hoary old weapons, in the form of religious bigotry and the Fear of the Unknown, are being hawked about in the countryside?