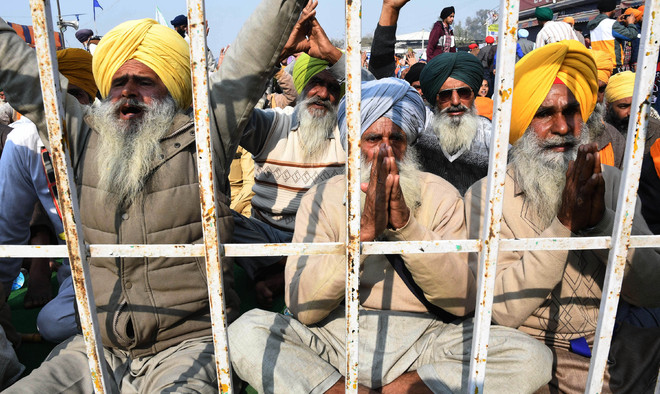 Farmers protest at the Singhu border near Delhi. Mukesh Aggarwal

It’s been nearly 100 days since farmers began their agitation on the Delhi borders. The families of young farmers who lost their lives during the stir are yet to come to terms with the loss.

Farmer Jatinder Singh (22) of Fatta Maluka village in Mansa district died in a road mishap on way to Delhi.

In order to show solidarity with the protesting farmers, he took his tractor-trailer and headed towards Delhi in December along with a few villagers but on the way, a Canter hit his tractor and killed him near Hisar.

Sukhpal Singh, Jatinder’s father, said, “I had to go to the Delhi protest, but Jatinder told me that his friends from the village were going there so he will join them. So I dropped my plan.”

He says if he had gone to Delhi that day instead of his son, the latter would have been alive.

Gursewak Singh, village sarpanch, said the family was inconsolable. Jatinder had got married just a month and a half ago. “This is the worst that can happen to a newlywed couple,” he added.

Jaspreet Singh (18), a resident of Chauke village, in the Maur tehsil in Bathinda, is probably one of the youngest of the casualties that took place during the farmers’ protest at the Singhu and Tikri borders.

Around two months have passed since his demise but his parents are in a state of mourning and still can’t believe their son is no more.

Gurmail Singh, father of Jaspreet, said, “We still don’t believe that our only son is no more. He was preparing for Army recruitment as he wanted to serve the nation. He was of the view that one member of every farmer family should participate in the protest as the laws were against the farmers.”

Gurmail says they never thought that the farmer agitation would change their life forever, and now, they were left with nothing.