Two hurt as 18-year-old rams car into scooter after hitting an auto, arrested 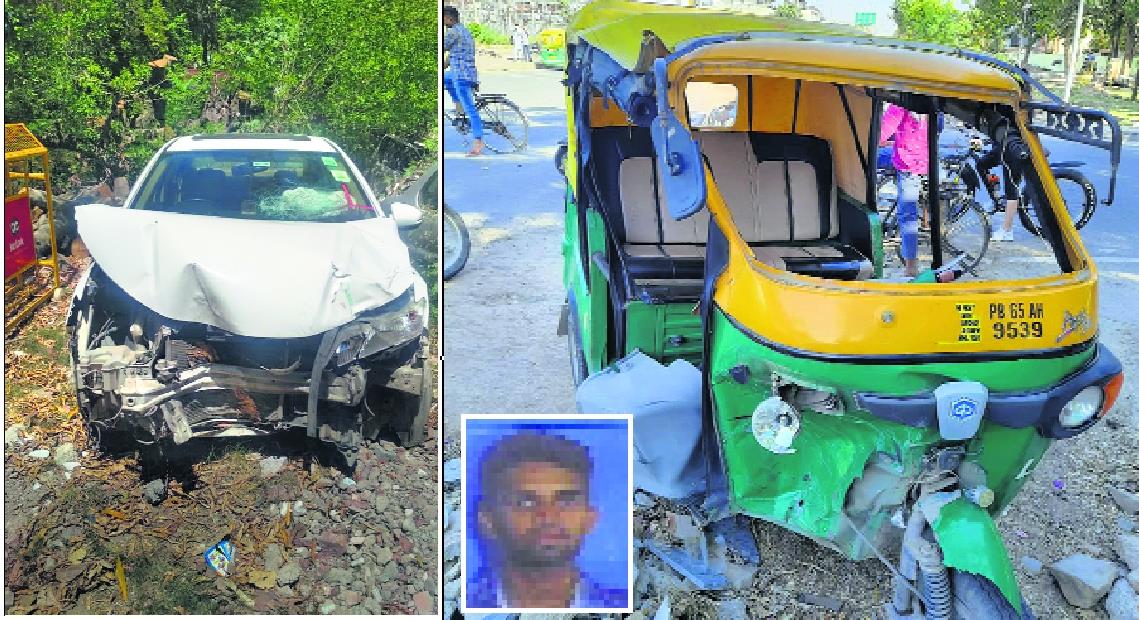 The vehicles involved in the accident in Mohali; and (inset) the victim, Arjun Yadav. Tribune photos

An auto-rickshaw driver was killed while a scooterist and his wife were injured when a speeding car hit the two vehicles at the Sector 70, Phase 7-3B2 traffic lights, here this morning.

Arjun Yadav, 35, a resident of Phase 3, was rushed to the Phase 6 hospital from where he was shifted to the GMCH, Sector 32, Chandigarh, where he succumbed to his injuries during the treatment.

Pillion rider Aditi suffered a fracture in her leg. Her husband Abhimanyu Yadav, the scooterist, was also hurt in the incident and was admitted to a private hospital.

Based on the statement of Abhimanyu Yadav, the police arrested car driver Prithvi Thakur. The 18-year-old Phase-1 resident was booked under Sections 229, 337, 427, 304-A of the IPC at the Mataur police station.

The car reportedly had an L-sticker (learner’s license) pasted on its windscreen.

The police are investigating whether the vehicles involved in the accident had jumped traffic lights or not.

The postmortem of the deceased will be held tomorrow, the police informed. They also ruled out the drunken driving case.

“Car driver Prithvi Thakur was on his way to tuition classes and was accompanied by his father at the time of accident. He had a driving licence in his possession,” said ASI Charanjit Singh.

“The scooterist couple was on their way to a school in Balongi,” Singh said, adding “we are trying to contact the victim’s family.”

On March 20, three persons were killed and as many suffered injuries when a recklessly driven Mercedes rammed into an office cab and then went on to hit two cyclists near Radha Soami Satsang Bhawan chowk at Mataur.

Car driver Samrat Singh, 18, was not possessing a license and was arrested. His two accomplices are still absconding. — TNS