Had planned protest outside Punjab CM’s residence over agriculture crisis 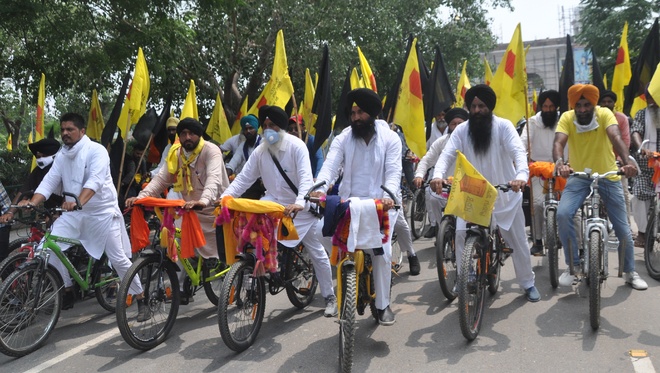 Bains brothers and members of the Lok Insaaf Party during a cycle rally in Mohali on Friday. Tribune photo: Vicky

A cycle rally of the Lok Insaaf Party reached here this afternoon to protest outside the Punjab Chief Minister’s residence in Chandigarh. The rally, “Kisan Bachao, Punjab Bachao Rosh Yatra”, was flagged off from Amritsar two days ago.

Before leaving for the CM’s residence, Bains brothers said their protest rally, “Kisan Bachao, Punjab Bachao Rosh Yatra”, was purely in the interest of Punjab farmers.

They said ordinances on agriculture, passed by the Centre recently, would ruin the future of Punjab farmers. To save Punjab, its farmers should be saved. Agriculture and farmers were under threat not only from the corporate, but also from the government. They would present a memorandum to the Punjab Chief Minister in this regard.

To highlight the agrarian crisis, Bains brothers and other party activists had started the cycle rally from Amritsar two days ago. However, they were booked on the way by the Phagwara administration for allegedly violating the Covid-19 protocol.

The Mohali police on Friday booked Simarjit Singh Bains and Balwinder Singh Bains, popularly known as Bains brothers, and their party workers for holding a cycle rally amid the Covid-19 outbreak.

DSP (City 1) Gursher Singh said: “We have registered a case against 150 activists, who gathered here during the cycle rally. Bains brothers are among four persons who have been named in the FIR. The case was registered under Section 51 of the Disaster Management Act and Section 188 of the IPC at the Mataur police station.” The DSP said the MLAs were yet to be questioned in this matter.