As many as 5,885 students and volunteers gathered for flag formation at the cricket stadium

Strengthening Prime Minister Narendra Modi's ongoing 'Har Ghar Tiranga' campaign and taking it to international level to mark the 75th Independence Day of India, the NID Foundation and Chandigarh University on Saturday created the Guinness World Record for formation of ‘World's Largest Human Image of a Waving National Flag’ when as many as 5,885 students from Chandigarh University and other schools and colleges along with the volunteers of the NID Foundation of the UT and other dignitaries gathered for the flag formation at Chandigarh Cricket Stadium and created the history in the heart of the ‘City Beautiful’. 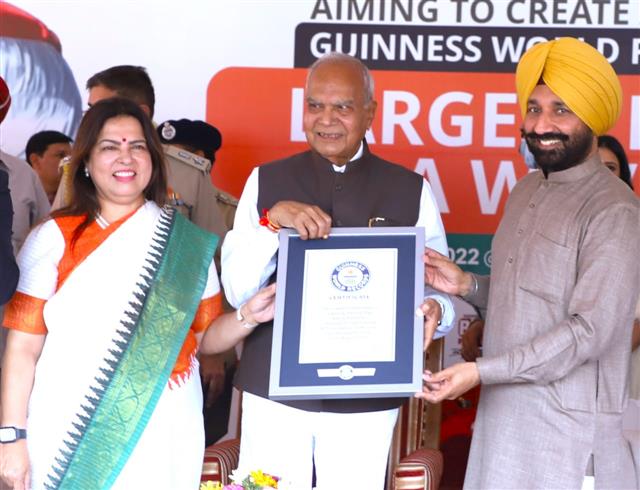 Swapnil Dangarikar, official Guinness World Records Adjudicator, who was present at the event verified the record. “The previous world record for the largest human image of a waving national flag achieved by GEMS Education in Abu Dhabi, UAE has been broken and a new world record has been created by NID Foundation and Chandigarh University in today's event,” he confirmed.

UAE had achieved the record for the largest human image of a waving national flag with 4130 people, in 2017. However, India has broken the record comfortably, said the official. Dangarikar also handed over a copy of the GWR certificate to Punjab Governor and UT Administrator Banwarilal Purohit and S. Satnam Singh Sandhu, Chief Patron, NID Foundation, and Chancellor, Chandigarh University and congratulated them.

Speaking on the occasion, Banwarilal Purohit said that with the successful creation of world record formed by Chandigarh University and NID Foundation, Chandigarh has given a great message to the entire world, on the 75th anniversary of India's Independence Day.