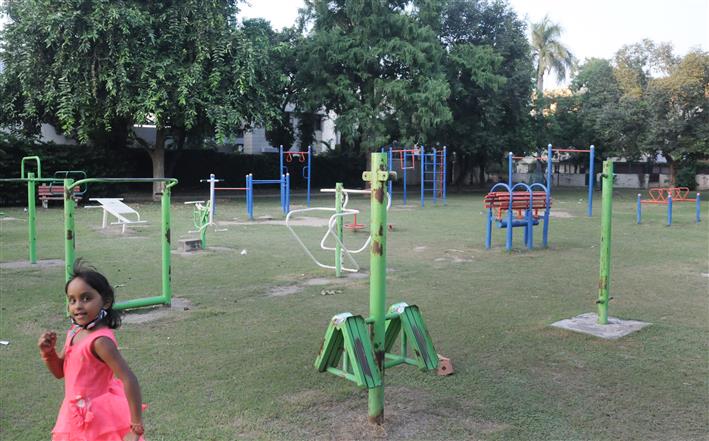 Setting up open-air gyms in parks across the city apparently remained the top priority of all Mayors in the past five years. Each Mayor spent a major share of their Rs2-crore funds on these, while residents felt maintenance of the equipment is a big issue due to its “low quality” and too many such facilities are wastage of money.

Incumbent Mayor Ravi Kant Sharma opened around 10 open-air gyms in his 10-month tenure so far. He spent a whopping Rs35.46 lakh on open-air gyms of the total Rs1.99 crore he spent on works. “We normally avoid opening gyms. It is on the demand of residents that councillors make a proposal to the Mayor. If we open one in Sector 22-B, residents of Sector 22-C also demand it. As far as taking care of the equipment is concerned, we recently mandated that the agency will be responsible for its maintenance for three years. Equipment usually breaks because two-three children sit on it or people do not use it properly,” said Ravi Kant.

His predecessor Raj Bala Malik in 2020 could utilise only Rs49.37 lakh due to the first Covid wave. Still, she spent Rs9.40 lakh on setting up open-air gyms in Sector 34 parks.

In 2019, the then Mayor Rajesh Kalia opened as many as nine gyms, spending Rs38.28 lakh of the total Rs1.97 crore he had utilised. Before him, Davesh Moudgil spent Rs30 lakh on three open-air gyms and a gym at sports stadium in Dadu Majra. Among all Mayors in the current five-year MC term, the first Mayor, Asha Kumari Jaswal, gave the city the most number of open-air gyms. She opened around 11 such gyms, spending nearly half of her funds on these. She spent Rs86 lakh of the total Rs1.90 crore she utilised on various works.

Hitesh Puri, Chairman of CRAWFED, an umbrella body of RWAs, said, “People use these gyms, but their maintenance is a big issue. Almost all gyms have broken equipment as these are not made of quality material. Besides, opening too many gyms is wastage of money. Instead, Mayors should spend on putting up mast lights in dark areas and make toe walls, which are the necessities.”

RK Garg, president of a senior citizens’ body, said, “An excessive number of gyms serves no purpose. Their wear and tear is a big problem. Mayors should instead identify and resolve civic issues besides raising infrastructure. They should also keep in mind the poor financial health of the civic body.” Each Mayor gets Rs2 crore for a one-year tenure. The Mayor can spend these funds at any ward barring his own. The current MC is ruled by the BJP.