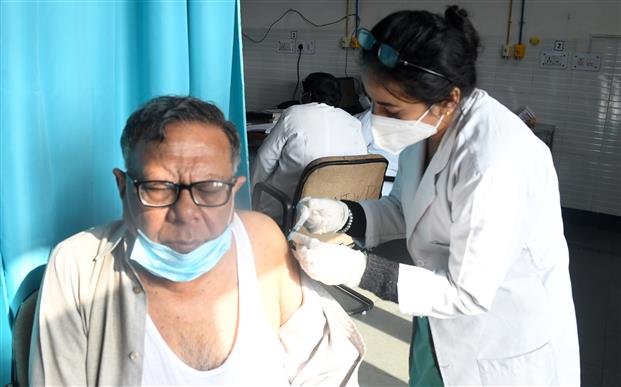 A senior citizen gets the booster dose at the GMSH, Sector 16, Chandigarh, on Monday. Pradeep Tewari

The city on Monday recorded its highest single-day spike of the pandemic – 967 cases, 45 per cent up from cases recorded a day earlier to take the cumulative number of infections to 69,388.

Also read: The silver lining — Only 4.1% patients in hospital

The number of active cases has risen to 3,253, up from 2,364 on Sunday. The city also witnessed one Covid death, that of a 68-year-old man from Dadu Majra, who was brought dead to the GMSH, Sector 16. He tested positive for Covid posthumously. He had a history of heart disease, hypertension and diabetes. 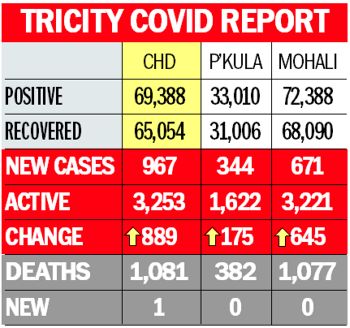 A total of 77 patients were discharged. A positivity rate of 23.13 per cent was recorded as 4,181 samples were tested in the past 24 hours. TNS

Municipal Commissioner Anindita Mitra and Chief Engineer NP Sharma have quarantined themselves. After her husband SK Raju, also an IAS officer, tested positive, she quarantined herself as a precaution. However, she held official meetings digitally on Monday. She also spoke to the new Mayor on the phone. Sharma said he was not feeling well since Friday and had quarantined himself.

671 cases surface in Mohali, no fatality