Few show up as cinemas reopen in Chandigarh

Slowly and steadily, we’ll get there, says distributor 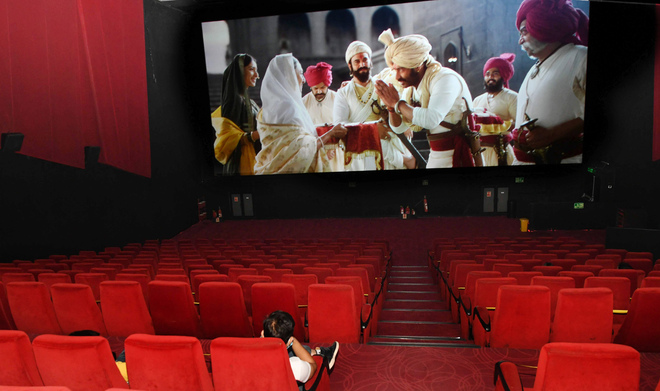 An auditorium of a multiplex wears a deserted look in Chandigarh on Friday. Tribune Photo Manoj Mahajan.

“Many a little, makes a mickle”. This Friday may not have lived up to the expectations in terms of movie business for a re-opening day in the tricity. However, the fact that people walked up to theatres amid the ongoing pandemic is in itself a commendable affair. So much so, that staffers and the management team of PVR could not hold back their emotions to clap and cheer for the viewers who walked out after watching the movie.

Chandigarh: Deputy Commissioner Mandip Singh Brar on Friday reviewed the arrangements made by theatres and multiplexes. During a meeting, the DC directed theatre and multiplex representatives to ensure strict adherence to SOPs framed to prevent Covid spread. TNS

The statement of Gautam Dutta, CEO, PVR Cinemas, that the safety and well-being of patrons and employees were their primary objective clearly shows that it is all about building that trust again, which can ensure a healthy progress in business, especially ahead of the festive season.

With SOPs and guidelines followed to the T and installation of anti-microbial film to UV scanners for packaged food to take safety a notch higher, PVR Cinemas has left no stone unturned to make re-opening a pleasant experience.

Ask youngsters who were part of the re-opening day shows, and they all have just one recommendation, “Why old movies? Many like us were interested to come, but found the choices boring or already watched.” The distributors have obvious answers, producers are not ready to risk new movies until there is a positive feedback or increase in occupancy. On the number of admits, distributor Raj Juneja says, “Slowly and steadily, I am hopeful we will get there. Those who came were excited about the theatre experience after a seven-month-long wait. I hope they get the word out. It is true that the numbers were not in our favour today, but we are hopeful.”

The four multiplexes — PVR Centra, PVR City Centre, Fun Cinemas and Piccadily Square — that re-opened on Friday said the maximum bookings were for “Tanhaji” (Hindi movie) and “Chal Mera Putt” (Punjabi). A representative from Fun Cinemas said their show started late around 4 pm as they wanted to make sure that everything was in order.

He said, “We only had two movies, ‘Malang and Chal Mera Putt 2’. We only saw two customers for both shows.”

Centra Mall, which recorded the highest number of admits (26) by the end of their last show at 6.40 pm for “Muklawa”, saw a promising start with the first show of “Tanhaji”. What started from 12 admits in the morning, came down to seven for the 2.45 pm show and declined to one admit for the last one.

At Piccadily Square, a representative gave a rough figure of around 20 admits. At PVR City Centre, the viewers’ number grew as the day progressed.