Rakesh Tikait, who hails from Muzaffarnagar and is the son of the late founder of the BKU, Mahendra Singh Tikait, is at the forefront of the farmers’ agitation. He has managed to mend fences between his community and the Muslims of western UP and in panchayat after mahapanchayat, farmers have vowed to defeat the BJP in 2022. 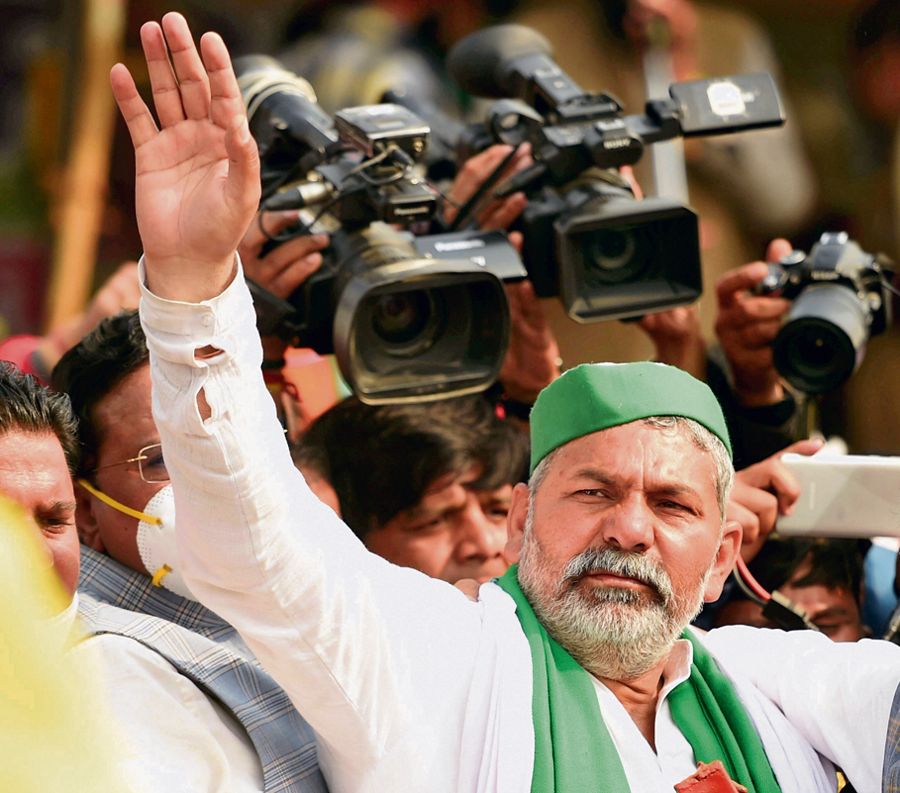 Battleground: The Lakhimpur Kheri tragedy has heightened tensions between the farming community and the BJP. PTI

If there were any doubts about the BJP strategy for next year’s UP Assembly polls, RSS chief Mohan Bhagwat cleared the air in his annual Dasehra address. He set the stage for a polarised campaign by stoking Hindu insecurities about the minorities and flagging communally sensitive issues.

He highlighted two measures which are likely to form prominent themes of the ground-level campaign. One is the compilation of a national register of citizens. The other is a population control law, which is already in circulation in UP in the form of a draft Bill. Bhagwat said that both are necessary to check the “vast differences in growth rates of different religious groups, infiltration and conversion resulting in religious imbalance of the population ratio, especially in border areas.”

These are dog whistles to unite Hindus by invoking fears of being outnumbered by “others”. In the context of UP, the “others” are Muslims who constitute an estimated 19.3 per cent of the state population and can influence the electoral outcomes in roughly 130 of the 403 Assembly constituencies.

It is hardly surprising that Bhagwat used his Dasehra address for a political speech, laying out a majoritarian agenda for the UP polls. A tough battle lies ahead, with the BJP fighting to win a second term amid widespread public disaffection which has given rise to fears that its carefully crafted rainbow caste coalition is unravelling.

Yet, it’s an election the BJP must win at all costs, not just because of UP’s clout in terms of the Lok Sabha numbers but also because the Sangh Parivar hopes to replicate its successful Hindutva experiment in Gujarat in this populous heartland state which is home to important Islamic centres of theology and has large concentrated pockets of Muslims.

For three consecutive elections since 2014, the BJP has managed to prove that Muslims can be made irrelevant to UP’s electoral paradigm if Hindus rise above caste differences and vote as a bloc. It stitched together a formidable coalition of Hindu social groups consisting of upper castes, non-Yadav backward castes and non-Jatav Dalits to win sweeping victories in the Lok Sabha polls of 2014 and 2019 and the Assembly polls of 2017.

Much water has flowed under the bridge since 2019, giving rise to deepening concern that this winning Hindu alliance may be coming apart as the 2022 polls approach. Four groups are a major source of worry for the BJP-RSS. One is the lower backward castes. They were a new catch in 2014 and have been a pillar of the BJP’s support base in UP since.

Today, they seem to be drifting away for a variety of reasons. For instance, this section has been the worst affected by the increasing joblessness in a Covid-afflicted listless economy. It has also been hit the hardest by the pandemic which raged through UP villages that were ill equipped to handle medical emergencies.

Pictures of bodies being washed up on the banks of the Ganga during the second wave continue to haunt as do photographs of mass cremations in open fields and on city pavements because overflowing crematoriums were hard pressed to offer a dignified farewell to the dead.

A second worry is the Jats whose unstinted support since the 2013 communal violence in Muzaffarnagar has ensured the BJP’s domination of western UP. This support appears to be wavering because of the controversial farm laws. Rakesh Tikait, who hails from Muzaffarnagar and is the son of the late founder of the Bharatiya Kisan Union, Mahendra Singh Tikait, is at the forefront of the farmers' agitation. He has managed to mend fences between his community and the Muslims of western UP and in panchayat after mahapanchayat, farmers have vowed to defeat the BJP in 2022.

The recent tragedy at Lakhimpur Kheri, where four Jat Sikh farmers were mowed down by a vehicle belonging to union minister Ajay Mishra’s son has only heightened tensions between the farming community and the BJP.

The alienation of non-Jatav Dalit groups is a third factor to contend with. Communities like the Passis and Koris have been committed voters, but there are signs that they too are doing a rethink because of a spurt in clashes and tensions between Scheduled Caste groups and UP Chief Minister Yogi Adityanath’s Thakur clan.

In fact, the Yogi administration is seen as a return to Thakurvad. A Thakur-packed police force running riot in the state amid frequent reports of fake encounters and harassment of ordinary businessmen has served to reaffirm this perception. And, Yogi has done little to dispel it by continuing to protect Thakur police officers accused of various misdeeds.

From this flows the fourth reason for anxiety: a perceptible disenchantment among Brahmins who have been core supporters of the BJP ever since the Ram Janmabhoomi movement was launched in the late 1980s. Although community members still dominate the administration, the free run given to a police force dominated by Thakurs has upset Brahmins used to controlling all the levers of power.

The clouds darkening the electoral landscape leave the BJP with little choice but to follow Bhagwat’s prescription for a polarised campaign. The writing was on the wall when Yogi Adityanath won the tussle with the Modi-Shah duo some months ago and stayed on as UP CM. It is no secret that the top brass in Delhi wanted him out, or at least have his wings clipped by the induction of a former bureaucrat loyal to Modi.

Yogi triumphed thanks to the backing of the RSS which had decided as early as then that Hindutva would form the main campaign plank in UP. And who better to do the job than a saffron-clad monk whose claim to being a Hindu icon almost rivals that of Modi?

It is significant that after Bhagwat’s prod, Modi wove Hindu imagery into his speech at Kushinagar while inaugurating the first international airport in the region. The Opposition will have to think out of the box to counter what promises to be a high-pitched divisive campaign.