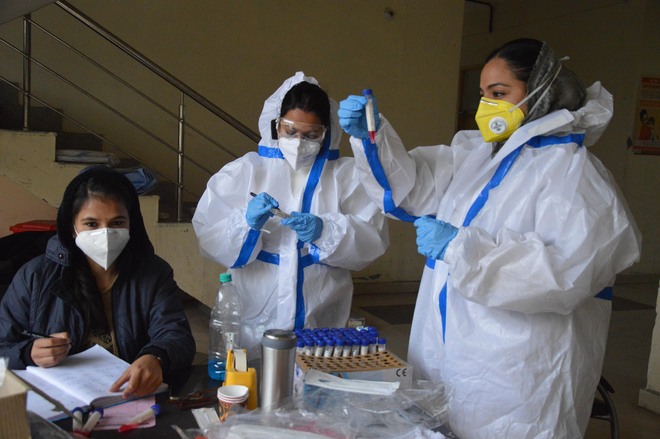 Samples for Covid being collected by hospital staff in Ludhiana.

Thirtyeight cases of Covid-19 were reported from Ludhiana district on Wednesday. A total of 25,182 cases have been reported in the district till date.

Civil Surgeon Sukhjivan Kakkar confirmed that 52 fresh cases, including 38 from Ludhiana and 14 from other districts, had been reported. In Ludhiana, eight patients came in contact with positive patients, five visited OPDs, 19 persons with influenza-like illness visited flu corner and six others, including one with severe acute respiratory illness (SARI), tested positive for the virus.

Deputy Commissioner Varinder Kumar Sharma said there were 310 active patients in the district at present. He further said that till date, a total of 5,65,006 samples had been taken, out of which the reports of 5,63,484 samples had been received, of which 5,34,506 samples were found negative, while the reports of 1,522 samples were pending. Now, the total number of patients related to Ludhiana was 25,182, while 3,796 patients belonged to other districts/states. He said one patient from Himachal Pradesh lost his life today. Now, the total number of persons who had lost their lives included 976 from Ludhiana and 461 from other districts.

He said that till date, 55,583 persons had been kept under home quarantine in the district and at present, the number of such persons was 846. Today, 37 persons were sent for home quarantine.

Today, 2,253 samples of the suspected patients were sent for testing.