'Do it, or we will ask the Centre to take over': Delhi HC pulls up AAP government over oxygen shortage 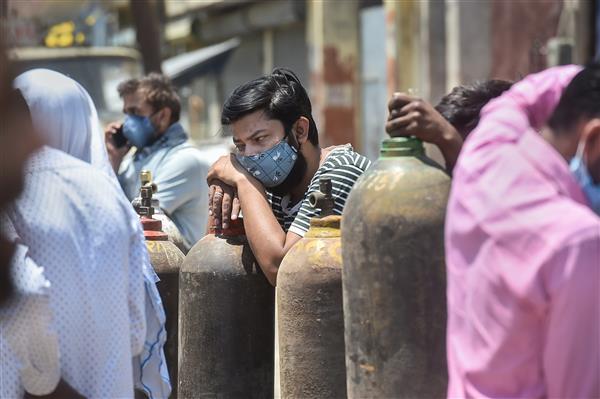 Pulling up the AAP Government over its ‘failure’ to check black marketing of oxygen cylinders and crucial medicines needed by COVID-19 patients, the Delhi High Court on Tuesday said if the NCT government was unable to handle the situation, it will ask the Centre to take over the task.

“Set your house in order. Enough is enough. If you can’t do it, tell us… we will ask the central government to take over these (oxygen refilling) plants. We can’t let people die,” a Bench of Justice Vipin Sanghi and Justice Rekha Palli told Delhi Government standing counsel Rahul Mehra.

It directed the Delhi government to take over plants of re-fillers of oxygen cylinders in case they failed to maintain supply to hospitals and issued contempt notices to five suppliers for not appearing in the hearing despite orders. ‘It’s not the time to become vultures,” it said angrily.

“Be sure if lives are lost, we are going to haul up their officers. Mr. Tushar Mehta (Solicitor General) was right that the situation is not like what is shown here and the problem lies with the Delhi government,” it said.

During the hearing on the oxygen crisis and shortage of medicines to treat COVID-19 patients, the Bench said the “problem lies with the Delhi government. It directed nodal officer Udit Prakash to ensure supply of oxygen by cylinders to hospitals and nursing homes without fail.

The entire system has failed as black marketing of oxygen cylinders and crucial medicines for treating COVID-19 patients is going on, it said, adding, the Delhi government has left re-fillers to have a free run even as hospitals were crying hoarse for oxygen.

The HC directed the Delhi government to file a report in two days on the number of deaths of COVID-19 patients in hospitals/nursing homes due to oxygen shortage as their families needed to be compensated. “We need to compensate all those persons whose patients died due to this. This is the state’s responsibility,” it said.

It directed the city government to check black marketing of oxygen cylinders and medicines and ensure oxygen distribution to hospitals.

“In today’s situation nobody can be allowed to take public for a rid,” it said, and directed the government to file an affidavit on the status of oxygen stocks available with gas re-fillers by Wednesday.

It asked the Delhi government to take account of stock and sale of medicines such as Remdesivir, Fabiflu and Tocilizumab at hospital pharmacies, as people are unable to get these drugs which are being sold at much higher rates in the black market and to do a random audit of supplies.

The court said even after supplying tonnes and tonnes of oxygen no account is maintained by authorities about supplies.

“This is leading to an artificial shortage of oxygen on one hand and black marketing on the other hand,” it said, adding that the reluctance of re-filler units to provide information to the government makes it obvious that they do not want to maintain transparency.

The high court said the contempt notices will be served to fillers through the Delhi government nodal officer. (With PTI Inputs)