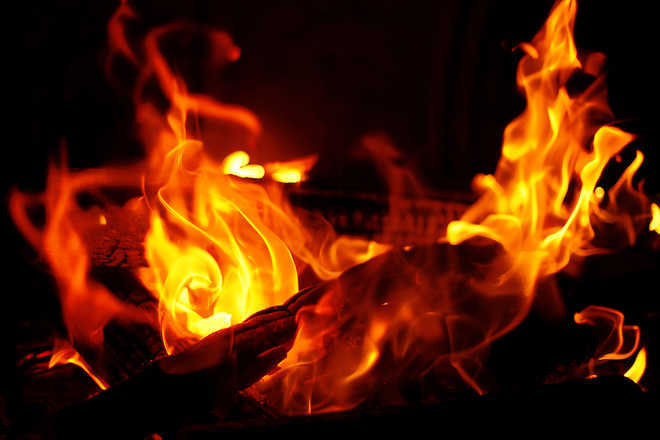 Four workers are suspected to be trapped inside a shoe godown in west Delhi where a massive fire broke out on Monday morning, police said.

Search and rescue operations were underway at the two-storey building in Udyog Nagar, they said, adding that the fire has been doused after 35 fire tenders and around 140 fire personnel were pressed into service.

Police said initially ten workers were suspected to be trapped inside the godown. Four among them were rescued unhurt in the initial stages while two other workers, who suffered minor burn injuries and were given first aid at the spot, were rescued later in the afternoon.

The police said four more workers are suspected to be still trapped inside the godown and a search-cum-rescue operation is still underway to trace those reported missing.

Initially both the police and fire-fighters received a call about the blaze at the factory but later during enquiry, it was found that the two-storey building houses godown where shoes are assembled and packed for sale, officials said.

"We got a PCR call about a fire at a shoe factory in Udyog Nagar at 8.56 am. Twenty-four fire tenders were deployed at the spot and 15 more were later pressed into service to bring the blaze under control," Deputy Commissioner of Police (Outer) Parvinder Singh said.

The senior police officer said it is suspected that the fire started from the first floor of the building and later spread to other floors.

He said the godown was shut and usually the shifts begins around 8.30 am but it is suspected that a few workers who came earlier allegedly got trapped inside as the fire broke out.

No major injuries have been reported in the incident so far, according to the police.

The owner of the godown has been identified as Pankaj Garg, police said, adding a case has been registered in connection with the incident.

Elaborating on the challenges faced by the fire-fighters, the senior fire official said they were initially informed that the blaze was at a shoe factory but it was found to be a godown where shoe materials were assembled for packaging.

The building also did not have any fire-safety equipments in place and was heavily jammed with highly combustible materials due to which the fire spread faster.

"We were not given correct information at first place that it was a godown. Moreover, we were not informed that workers were trapped inside. It was only after about two hours into the fire-fighting operation that we got to know that people were trapped inside when kin of few started coming to the spot asking for their men," said Garg.

He said those trapped could have been saved on time if correct information was shared with them.

"Four more workers are reported to be missing but we still have not been able to trace them. We lost the golden hours when we could have rescued those trapped if information was shared with us on time.

"Even though the fire has been doused, but because of heat and smoke, it's becoming tough to trace those reported missing," Garg added.

Due to the extreme heat, the building has also developed cracks causing a hindrance in search and rescue operations, officials said.

Two CATS ambulances are also at the spot to attend to any emergencies.

The exact cause of the fire is not known yet but short-circuit is suspected to be the reason. — PTI