Seven Indian-Americans in Forbes’ list of richest people in US 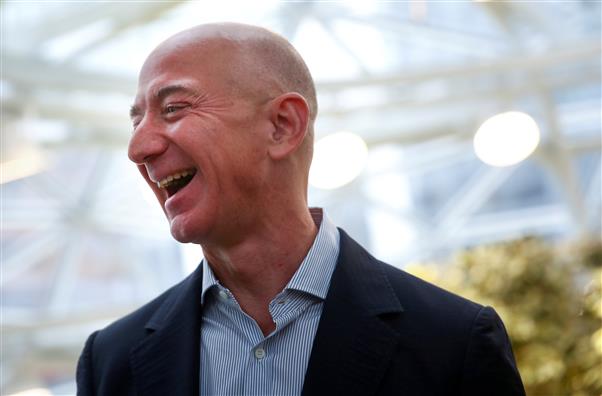 Seven Indian-Americans have figured in Forbes’ list of richest Americans, topped by Amazon founder Jeff Bezos for the third year in a row.

The 2020 Forbes list of 400 Richest People in America has been topped by Bezos, 56, who has a net worth of USD 179 billion and has occupied the spot of the richest person in the US for the third year in a row.

Bill & Melinda Gates Foundation Cofounder Bill Gates is ranked second on the list with a net worth of USD 111 billion.

The richest people in the US saw their wealth swell despite the coronavirus pandemic’s devastated impact on the economy.

“Pandemic be damned: America’s 400 richest are worth a record USD 3.2 trillion, up USD 240 billion from a year ago, aided by a stock market that has defied the virus…Even in these trying times mega-fortunes are still being minted,” Forbes said.

President Donald Trump is ranked 339th on the list with a net worth of USD 2.5 billion.

Forbes said in 1996, Chaudhry and his wife, Jyoti, both quit their jobs and put their life savings to start cybersecurity firm SecureIT, his first startup.

Wadhwani, 73, has been ranked 238th on the list and has a net worth of USD 3.4 billion. His Symphony Technology Group brings in USD 2.5 billion in annual revenues and Wadhwani combined nine of his companies that were AI-focused into a new group called SymphonyAI in 2017, Forbes said.

An alumnus of Indian Institute of Technology and Carnegie Mellon, Forbes said the serial entrepreneur founded Aspect Development, which i2 Technologies acquired for USD 9.3 billion in stock in 1999.

Romesh and his brother, Sunil, founded the Wadhwani Institute of Artificial Intelligence at the University of Mumbai in 2018, committing over USD 30 million.

Wayfair, which now offers more than 18 million products, generated USD 9.1 billion in net revenue in 2019, up 35 per cent from the previous year, Forbes said.

Khosla, 65 is ranked 353rd with a net worth of USD 2.4 billion. Khosla cofounded computer hardware firm Sun Microsystems in 1982 and spent 18 years at venture capital firm Kleiner Perkins Caufield & Byers before launching his own fund. In June 2019, Khosla said he believes artificial intelligence could replace traditional industries such as radiology and music, Forbes added.

On the 359th spot is Shriram, 63, who has a net worth of USD 2.3 billion. Forbes said an early Google backer, Shriram has sold off most of his stock but remains on the board of its parent company, Alphabet.

Forbes said Gangwal made his fortune from InterGlobe Aviation, the parent outfit of budget airline IndiGo, India’s largest by market share. Gangwal cofounded IndiGo, headquartered outside Delhi, with Rahul Bhatia in 2006 with one aircraft, it said.

On the 359th spot is Bhusri with a net worth of USD 2.3 billion. Bhusri is CEO of business software firm Workday, which he cofounded with Dave Duffield, the founder of PeopleSoft.

Bhusri started his career in the early 1990s at business software firm PeopleSoft, where he rose to become vice chairman.

Bhusri has been on the Forbes Midas List six times since 2008 and in May 2018, Bhusri joined the Giving Pledge, a commitment by the world’s wealthiest people to dedicate the majority of their wealth to philanthropy, Forbes said. PTI