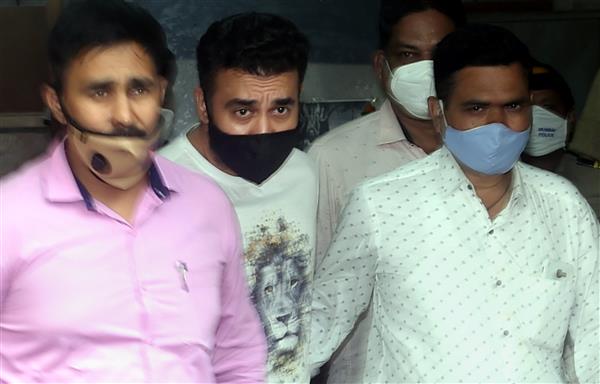 Raj Kundra (C) being taken to the Esplanade Court as he was arrested in the pornography-related case Mumbai, Friday. PTI Photo

The Bombay High Court on Tuesday said it cannot pass any order granting urgent relief to businessman Raj Kundra, arrested in a case of alleged production and distribution of pornographic films through apps, without first hearing the prosecution.

Justice A S Gadkari directed the police to file its affidavit by July 29 in response to a petition submitted by Kundra (45) challenging his arrest in the case.

Kundra's lawyers Aabad Ponda and Subhash Jadhav argued in the HC on Tuesday that the police failed to follow the procedure laid down in law and ought to have first issued a notice under section 41A of the CrPC instead of arresting him directly.

Public prosecutor Aruna Kamat Pai refuted the claim and said a notice was indeed issued to Kundra before he was placed under arrest.

The HC directed Pai to file an affidavit in response to the petition. Ponda then sought some interim relief for his client.

Justice Gadkari, however, refused and said it cannot grant any relief without giving a chance to the prosecution first to respond to the petition.

Kundra, in his petition, has maintained his arrest and the subsequent order passed by the magistrate's court remanding him in police custody were illegal as no notice was issued to him.

As per section 41A of the CrPC, the police may, in cases where arrest is not warranted, issue summons to the accused person and record his or her statement.

Kundra, in his plea, has also said the material which the police claimed to be pornographic did not depict direct or explicit sexual acts but shows material in the form of short movies "which are lascivious or appeal to the prurient interest of persons at best".

After Kundra's arrest, the crime branch had described him as the "key conspirator" of the case.

He has been booked under Indian Penal Code Sections 420 (cheating), 34 (common intention), 292 and 293 (related to obscene and indecent advertisements and displays), and relevant sections of the IT Act and the Indecent Representation of Women (Prohibition) Act.

The police have claimed to have found 51 obscene videos during searches at his office. — PTI