Apple of discord: Himachal’s growers up in arms : The Tribune India

Apple of discord: Himachal’s growers up in arms

HP’s growers are up in arms over unsustainable cost of production and depleting profit margins. In poll year, they sense a chance to effect change to ‘save the industry’ 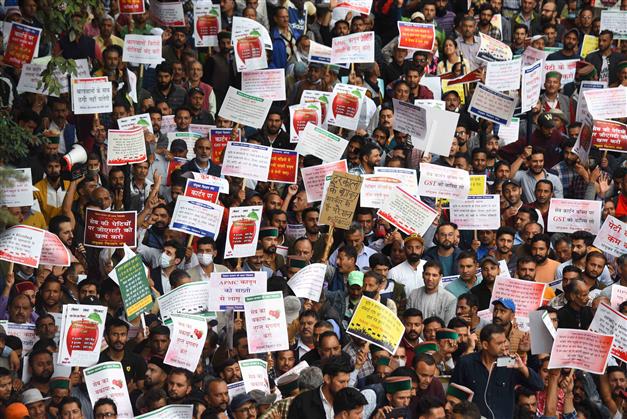 THE apple growers are angry and anxious. After more than three decades since the last major apple agitation in Himachal Pradesh, they are out on the streets, protesting the sharp rise in the cost of production and dwindling profit margins. The 6 per cent increase in GST on cartons, coupled with a sharp rise in the rate of trays used inside the box this year, came as the last straw, spurring them into launching a “decisive movement” against the government and private companies procuring and storing apples. 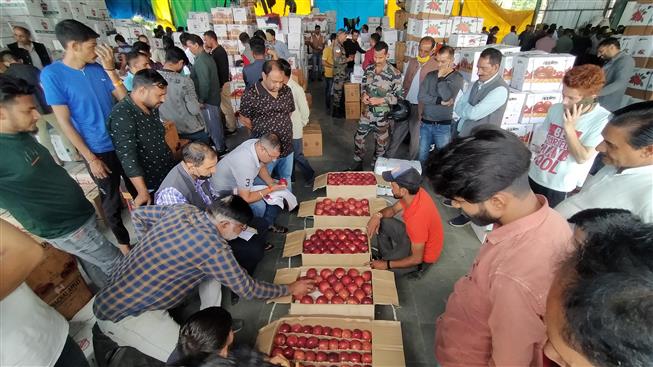 “The input cost has been increasing sharply. The packaging material alone is dearer by over Rs 40 per box over the past two to three years,” says Lokinder Bisht, president of the Progressive Growers Association. “Subsidies on fertilisers, except for urea, have dried up and the expenditure has gone up by 40 to over 100 per cent. A 25-kg bag of calcium nitrate, for instance, that used to cost Rs 850-950 in 2019 is now sold anywhere between Rs 1,700 and Rs 1,900. The prices of pesticides, too, have seen an exponential rise. On the other hand, the average apple price continues to be what it was a decade back,” says Bisht. In the midst of this all-round inflation in input costs, apple growers fear the cultivation of fruit will soon become unsustainable. “If the cost of production continues to rise, the livelihood of close to two lakh families will be destroyed in the next few years,” says Sanjeev Thakur, president of the Chawara Apple Valley Society.

The sentiment seems to have resonated with a large number of apple growers, resulting in as many as 27 apple growers’ bodies coming together to form the Sanyukt Kisan Manch (SKM) last year. “It’s a non-political platform, formed for the sole purpose of raising the demands and grievances of apple growers and farmers. Every apple grower, no matter which party or ideology he is affiliated to, is welcome. The only condition is, he needs to limit himself to apple-related and farmers’ issues,” says Harish Chauhan, SKM convener. Incidentally, while Chauhan is a long-time BJP man, co-convener Sanjay Chauhan is an active CPM leader and Sanjeev Thakur, a major voice in SKM, is associated with the Congress. “It’s a question of saving our livelihood. And this can only be done if we stand together, forgetting party politics,” says Chauhan. With the manch attracting more support and elections round the corner, the Jai Ram Thakur government called SKM for a meeting last month.

The government announced a few conciliatory decisions like bearing 6 per cent GST increase on cartons, clearing pending MIS (market intervention scheme) payments, and restoring the system of providing subsidised pesticides through horticulture outlets. But the SKM isn’t convinced. Terming these mere announcements, the apple growers scaled up the protest to lay siege to the Secretariat, and then courted arrest at Mall Road. Recently, the protesters organised a sit-in in front of the Adani-owned controlled atmosphere (CA) stores. “These announcements have been made to distract and fizzle out the movement. And what about the remaining demands?” asks Chauhan.

Some of the major demands that the government has not been able to address are increasing the apple import duty to 100 per cent, removing GST on packaging material, implementing a Kashmir-like MIS scheme for procurement, and strict implementation of the HP Agricultural and Horticultural Produce Marketing Act, popularly known as APMC Act. Incidentally, the Chief Minister has taken up the issue of increasing import duty with the Centre, but with little success. The growers, however, are not impressed. “Why can’t the government take up the case more vociferously, given the contribution of apple to the state’s economy and reliance of so many people on it for their livelihood? Why can’t it build up a case for putting apple in a special category status to raise import duty?” asks Bisht, adding, “In the absence of higher import duty, cheap imports from countries like Iran are killing the local industry. We will not be able to compete with them in terms of prices.”

While the government is washing its hands of the demands regarding import duty and reduction in GST rates, the growers ask what stops it from strictly implementing the APMC Act and introducing the MIS scheme for all grades of apple which was there till the early 1990s. “Why doesn’t the government strictly implement the Act that was enacted to facilitate the sale of farmer’s produce and save him from exploitation?” asks Chauhan. “The growers are being looted. There are arbitrary deductions in the mandis, many buyers run away without making payments as bank guarantees have not been taken from them, payments are delayed, etc,” says Chauhan. Also, he adds, apple is not sold weight-wise as mandated by the Act. “The traders and buyers pressure growers into adding additional layers of fruit in the box. As a result, some boxes weigh up to 33-35 kg against the normal 22-25 kg. So, they are giving away around 7-8 kg for almost nothing,” points out Chauhan. He further says if the government announces a remunerative price to procure all three grades of apple through the MIS scheme (presently, only ‘C’ grade is procured through MIS at Rs 10.50 per kg), it will ensure the open market will not crash repeatedly, which happens far too often. “At the start of the season, premium apple fetched over Rs 3,000 per box. Now, the growers from higher altitudes are struggling to get Rs 1,500-1,600 for their best apple. If the government had fixed a reasonable MIS rate, the market would not have seen such a huge slump,” says Sohan Thakur, president of the Seb Utpadak Sangh.

Overall, the growers feel that almost every government failed to make provisions to keep the Rs 5,000-crore apple industry in good health. “There is no horticulture policy till date (work has started on it just a few months back), no horticulture board or commission, no plan to increase the per hectare yield, limited cold chain and processing facilities. A major push is required from the government,” says Bisht.

Harish Chauhan complains that the governments have not worked on building a proper marketing system. “The HP Horticulture Produce Marketing & Processing Corporation (HPMC) was conceived for marketing of the fruit. It had cold stores in most metros, including Chennai, Kolkata, Delhi, Mumbai, etc, and had outlets at several airports. Some fruit-processing units were also set up by 1980. Unfortunately, these facilities were never upgraded, and have become white elephants now,” says Chauhan. “We need micro cold stores and micro processing units at various places to give growers some hold on the supply chain,” he adds. Incidentally, HPMC is enhancing the capacity of its three CA stores and plans to build three more. A major processing plant is also coming up at Parala fruit mandi in Shimla under the World Bank-aided Horticulture Development Project.

Protest to continue, ‘will impact elections’

Faced with what they call an existential crisis, the apple growers are determined to sustain the movement for as long as it takes to save the apple industry. “The protest is not a flash in the pan. The SKM teams are going from village to village to make growers aware of the dangers. Everyone is feeling the pinch, especially small and marginal growers. The protest will soon snowball into a big movement,” says Praveen Mehta, SKM member. And with Assembly elections a couple of months away, the growers feel apple will be a major issue. “In at least 27 Assembly constituencies, mainly in Shimla, Kullu, Mandi, Kinnaur, Chamba and Sirmaur, apple will be a major issue. It will serve as a stern reminder that apple growers and the apple industry can no longer be taken for granted,” warns the SKM convener.

The HP Agricultural and Horticultural Produce Marketing Act, 2005, (referred to as APMC Act) lays down the rules and regulations for selling agricultural produce in APMC and private mandis. Sanyukt Kisan Manch alleges several norms in the Act have either not been implemented or put into place half-heartedly. State Agricultural Marketing Board Managing Director Naresh Thakur, however, says the Act has been implemented. “If there is any violation, we take appropriate action,” he said.

Growers claim the per box production cost is Rs 600-700 now. From plucking to selling, the grower roughly shells out Rs 300-350. “It includes expenditure on plucking, carriage, grading and packaging, freight and deductions at mandis,” says Dimple Panjta, an orchardist and member, Board of Management, University of Horticulture and Forestry, Nauni. The pre-harvest input cost includes pesticides, fertilisers, pruning and round-the-year maintenance. “Premium apple is only 40 per cent of total produce, so a grower makes good money only on this, that too if lucky.”