Human labour will continue to be the most important component of sugarcane cultivation. Hence, a system for monitoring the enforcement of standard labour laws should be established. The negative impact of labour displacement needs to be reversed by developing non-farm employment avenues as well as deep penetration of technological change for increasing labour productivity. 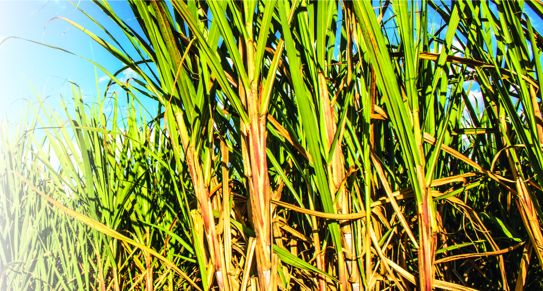 THE sugarcane sector plays a significant role in Indian economy as it provides raw material for sugar and industries producing alcohol, paper, chemicals and cattle feed. The sugarcane processing network consisting of 762 installed sugar mills has a number of associated industries and backward and forward linkages. Due to multi-purpose uses of sugarcane and its byproducts in various industries, the demand for increased production of sugarcane is growing.

With an area of 5 million hectares, sugarcane cultivation in India is carried out on about 2.57 per cent of the total cropped area. It provides employment and livelihood to around 60 lakh sugarcane growers, in addition to indirect employment to lakhs of people in associated industries. 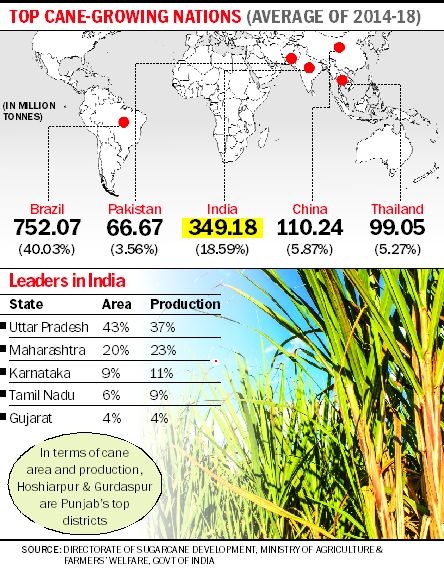 There has been a steady growth in area under sugarcane cultivation in India. The area was only 17.07 lakh hectares in 1950-51; it increased to 51.11 lakh hectares in 2018-19. The production of sugarcane was about 123.86 million tonnes by the mid-seventies, which rose to 400.15 million tonnes in 2018-19. The average productivity was 78.23 tonnes/hectare in that year. Uttar Pradesh is the main sugarcane-growing state in the country, allocating about 22 lakh hectares for cane cultivation, followed by Maharashtra with about 8.98 lakh hectares. Karnataka, Tamil Nadu, Gujarat and Andhra Pradesh are other major cane-growing states in the tropical region. In the sub-tropical region, Bihar, Haryana, Uttarakhand and Punjab are the key cane-growing states, besides UP.

The growth over the years (as depicted by compound growth rates or CGRs) in the all-India sugarcane area and yield was positive and around 1 per cent per year from 2001-02 to 2017-18 period. In Uttar Pradesh, the area growth was less than 1 per cent, but the yield growth was 1.249%. In Maharashtra, there was positive area and yield growth, with the area growth being much higher than that obtained in Uttar Pradesh. Andhra Pradesh, Haryana, Punjab, Uttarakhand, Tamil Nadu and Gujarat have recorded a significant negative growth rate in the area under sugarcane. In the sub-tropical region, Bihar exhibited positive CGR of 7.345% in the area, followed by Maharashtra (4.279%) and Karnataka (3.147%).

It is thus evident that Bihar and Uttar Pradesh in the sub-tropical region and Maharashtra and Karnataka in the tropical region have exhibited positive growth both in area and yield levels during the past 17 years. This points to scope for further expansion of the sugarcane sector in these states. In other states, more incentives and development efforts will be required to retain the already achieved levels of area coverage under sugarcane.

Sugarcane is a labour-intensive crop of long duration (12 months in the sub-tropical region and 12-18 months in the tropical region), which requires 150-180 labour days per hectare in sub-tropical and around 250-300 days in the tropical south region. Most of the operations in cane cultivation are carried out manually and the use of machinery is limited to operations like field preparation by a majority of the farmers. The human labour (HL) component accounted for 32.3% of the total cost of sugarcane cultivation and the factor share of labour in the value of output has marginally increased from 4.5% to 4.7% at the all-India level. The labour productivity in sugarcane cultivation has increased by 28.1%.

The proportion of hiring of humans, machines as well as bullock labour is also higher in these zones compared to other zones of the states. Higher labour use in these zones may be attributed to the adoption and diffusion of modern technology by the farmers, as well as the growth of custom-hiring business services in sugarcane production and mechanisation.

Mechanisation is considered to be a major labour-displacing technological change, whereas innovations in irrigation/water-saving and in planting methods are regarded as labour-augmenting changes. Technology-aided productivity improvements in the form of sub-soilers, improved planting methods like trench planting, drip irrigation and mechanised harvesting are thus required to ensure increasing share of the output to the labourers.

The human labour will continue to be the most important component of sugarcane crop cultivation. Hence, a system for monitoring the enforcement of standard labour laws should be established, especially in Maharashtra, where the use of migrant labour is quite prevalent. The negative impact of labour displacement needs to be reversed by developing non-farm employment avenues as well as the deep penetration of technological change for increasing labour productivity.