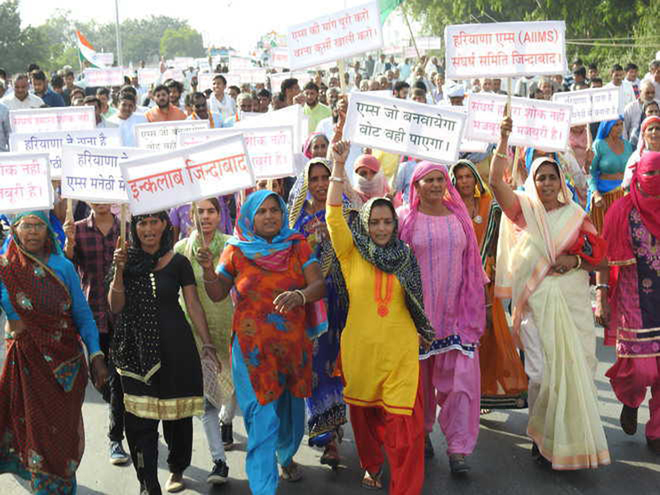 Residents of Rewari’s Manethi village had protested for long, demanding AIIMS to be constructed in their village. File photo

The district administration has proposed a site in Majra village for the ambitious AIIMS project, making a case against Manethi village where the premier hospital was planned initially. It has submitted a report in this connection to the Department of Medical Education and Research for perusal.

The department had sought the report to review the project’s progress with the Secretary (Coordination) at the Cabinet Secretariat, New Delhi, and officials of the Centre’s Health and Family Welfare Department.

An officer, on the condition of anonymity, said at least 200 acres of consolidated land was required for the project, but Manethi residents had offered 175 acres.

Besides, some landowners in Manethi were unwilling to sell off their land. “Hence, the site is unsuitable for the project,” he said.

On the other hand, the officer said, “residents of Majra village are willing to offer 316 acres. Land of the adjoining Bhalkhi village can also be bought, if required. These points have been mentioned in the report”.

The AIIMS will be constructed under the Pradhan Mantri Swasthya Suraksha Yojana. Prime Minister Narendra Modi had announced the project during his visit to Kurukshetra in February 2019.

A 225-acre site in Manethi village was initially proposed for the project, but the Center’s Forest Advisory Committee termed it as “non-specific” stating that the site was part of the Aravalli Plantation Zone where construction was banned.