Villagers say the project will be environmentally degrading 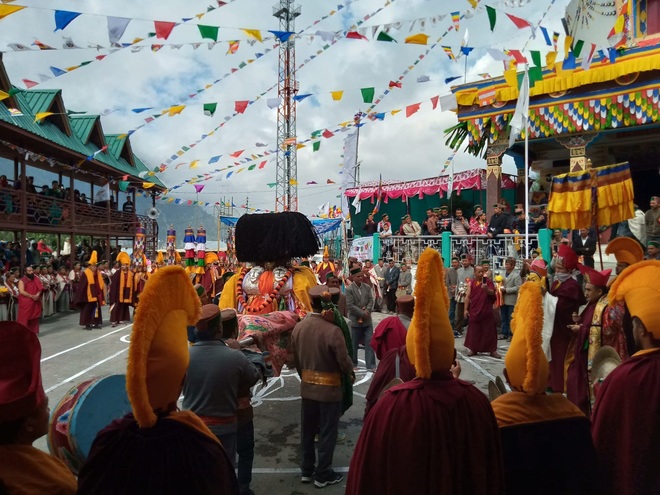 People of the Rarang panchayat in Kinnaur district on Monday seek ‘approval’ from the local deity to boycott the bypoll.

Armed with the stamp of approval from its local deity “Patharo”, the residents of Rarang panchayat in Kinnaur have decided to boycott the Mandi Lok Sabha by-poll in protest against the setting up of 804 MW Jangi Thopan hydel project. They termed it as environmentally degrading.

The fact that our deity ‘Patharo’ has given his consent to the decision to boycott the by-poll, now nobody from Rarang Panchayat will cast his or her vote as people have profound faith in the Devta. — Chering Gyocha, Secy, Rarang Sangharsh Samiti

Though the clamour for the boycott of the bypoll has been getting louder, now, with the local deity “Patharo” giving its sanction today, the villagers are likely to boycott polling en-bloc. The tribal Assembly segment of Kinnaur falls under the Mandi Lok Sabha constituency and there are about 1,000 registered voters in the Rarang Assembly segment.

The villagers from Rarang, Khab, Thopan and Khadar have been up in arms against the coming up of the hydel-project. They have been demanding that it should be scrapped as it will be environmentally degrading for the Rarang panchayat. The project has been allotted to Satluj Jal Vidyut Nigam Ltd, though the work is yet to begin. “The fact that our deity “Patharo” has given his

consent to the decision to boycott the bypoll, now nobody from Rarang Panchayat will cast his or her vote as people have profound faith in then Devta,” said Chering Gyocha, Secretary of the Rarang Sangharsh Samiti.

Chering warned that if the government tried to force and commission the Jangi Thopan project on the people, there will be an agitation. “The agreement with the public sector undertaking for commissioning of the project must be cancelled immediately or else the government will have to face the ire of the villagers,” warned Bhagat Singh, who is associated with the Save Himalaya Andolan and General Secretary of the Himalayan Buddhist Cultural Association.

“Despite the villagers holding several protests and sending numerous representations to the Centre as well as the state government in the past 12 years since the project was conceived no agency has bothered to even give us a patient hearing to address our grievances,” said Kishore Kumar, president of the Rarang Sangharsh Samiti. He added that it was up to the people whether they wished to exercise the right to franchise or not. As per their deity’s approval, nobody would cast their vote on October 30.