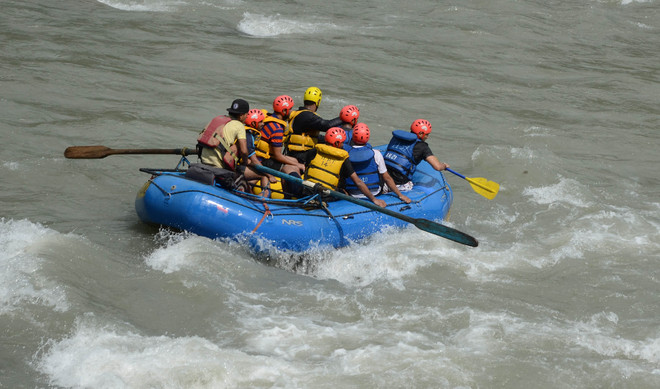 A new site for river rafting on the Beas from Nadaun to the Dehra bridge has been notified.

The state government has notified additional sites for paragliding and river rafting to give a boost to adventure tourism activities in the state, said Yunus, Director Tourism and Civil Aviation, here today.

He said that tourists visiting the state could now enjoy paragliding at new sites in Kullu, Kangra, Mandi, Chamba, and Shimla districts.

Under the Nai Raahein Nai Manzilein scheme, prospects were being explored to promote adventure sports in the hitherto unexplored areas of the state. The new notified paragliding sites include Pandhara to Gadsa and Khargan to Nangabag in Kullu, Tang Narwana to Khirku in Kangra, Darouta to Lahra (Khajjiar) and Lahra to Darol and Raina to Nainikhad Jarei in Chamba, he said. In Mandi district, the paragliding sites notified include Prashar and Spenidhar and Tikkar, and in Shimla, Junga to Chauri/Junga had been notified.

Yunus said that for the promotion of water sports, a new site for river rafting on the Beas from Nadaun to the Dehra bridge had also been notified. He added that for the safety of paragliding pilots and tourists, the Department of Tourism in collaboration with Atal Bihari Vajpayee Institute of Mountaineering and Allied Sports, Manali, had taken the initiative to provide training to paragliding pilots.

He said that in the past two years, around Rs 2 crore had been spent on imparting training to 749 persons, including basic mountaineering, paragliding, and basic, intermediate and advance skiing.

Besides, there are many other notified sites where paragliding is being done by adventure enthusiasts. These sites are Bir-Billing, Chohla Indru Nag near Dharamsala in Kangra district, Solang Nullah, Marhi, Talaiti-Talogi, Majach-Shanag in Kullu district, Mauja Rehad to Karganoo in Solan district, and Ser Jagaas in Sirmaur district.

Besides, notified river rafting sites include Shamshi to Jehri and Babeli to Pirdi in Kullu district, Luhri to Tattapani in Shimla district, Darch to Jispa and the Kaza bridge to Tabo in Lahaul and Spiti.