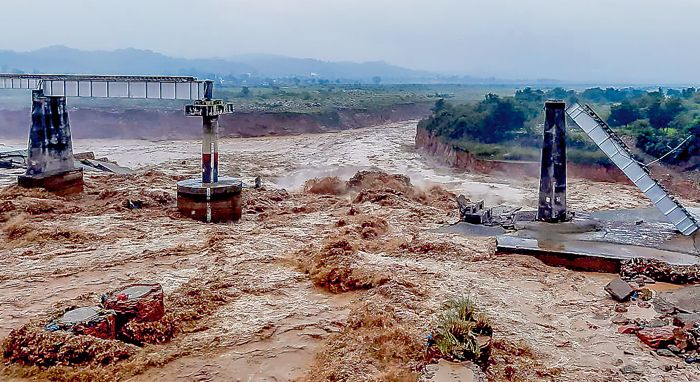 A portion of the railway bridge over the Chakki rivulet in Kangra collapsed after flash floods in Kangra on Saturday. PTI

Twenty-two persons were killed while six others were missing in incidents of landslide and flash floods triggered by heavy rain in Mandi, Chamba, Kangra, Shimla, Kullu and Una districts of Himachal Pradesh since Friday night, officials said.

As many as 743 roads, including the Kalka-Shimla National Highway-5 (at Shoghi), have been blocked for traffic due to landslides.

In Mandi district alone, 13 persons were killed, the officials said. The bodies of eight members of a family were retrieved from the debris of their house after a four-hour-long search operation by the National Disaster Response Force (NDRF) and the police at Kashan village in Gohar block. The bodies of two of the five members of a family washed away in flash floods at Sandoa village in the Darang area were recovered. Another body was found at Bagi village.

Three members of a family were buried alive under the debris of a house, which collapsed at Chudana village in the Banet area of Bhattiyat tehsil in Chamba district due to the downpour.

A 10-year-old child and a migrant labourer were killed as the ‘kuccha’ houses they were living in collapsed in Kangra district. Two tourists from UP were killed as their vehicle was hit by a boulder in Theog, Shimla. One person each died in rain-related incidents in Una and Kullu.