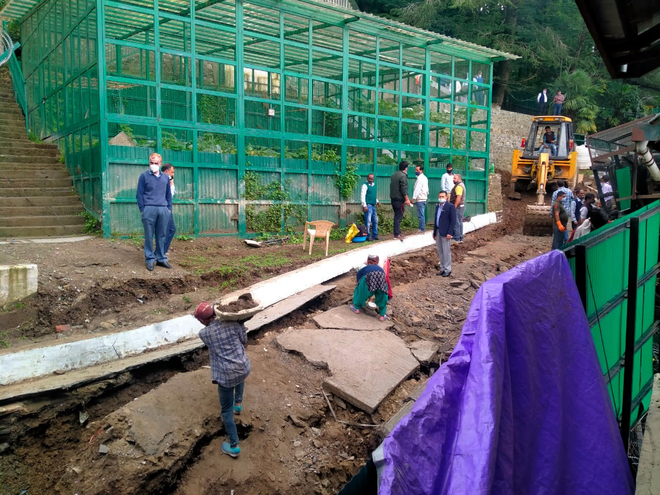 A part of the front wall at the Chief Minister’s residence Oak Over in Shimla collapsed on Thursday. Photo: Amit Kanwar

The Chief Minister’s residence, too, bore the brunt of the continuing ranis lashing several parts of the state. Following persistent rains over the past several days, a retaining wall on the premises of Oakover, the official residence of the Chief Minister, sunk early this morning.

However, the two buildings just a few metres from the retaining wall have been evacuated as a precaution. “There are 10-12 families in these two buildings and all of them have been shifted to circuit house,” said Negi. “Seeped-in water seems to have swept away the soil below the wall, causing the 10-15 m-long portion to sink. The sunk wall has stacked up against the adjacent houses,” said Negi.

Meanwhile, the PWD staff is working on a war-footing to resurrect the sunk wall. “We are on the job and hopefully should be able to fix this soon,” said a PWD executive engineer overseeing the restoration work. “We are taking every possible measure to ensure that the houses are not damaged. The residents, however, have been shifted as a precautionary measure,” an XEN said.

“We heard a massive thud as if some building had collapsed. When we saw what has happened, we went to the CM House. The CM was not there but his wife promptly ensured that the affected families were shifted and the restoration work was started immediately,” he said.