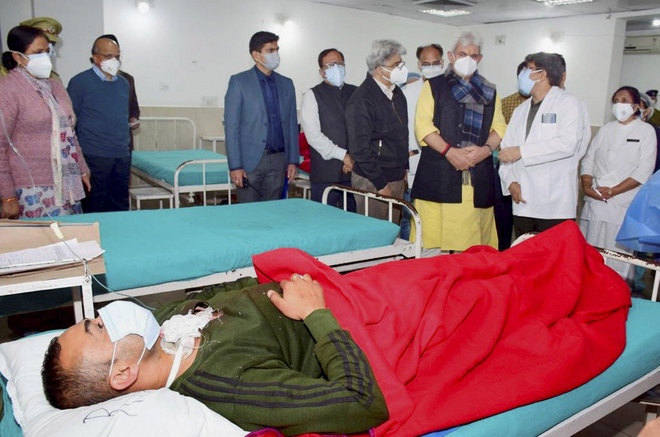 Lieutenant Governor Manoj Sinha said today that no outside force could derail the Jammu and Kashmir administration’s mission of peace and progress. He also paid a visit to a hospital here to enquire about the well-being of policemen injured in an encounter.

Four suspected Jaish-e-Mohammad terrorists were killed and two policemen were injured in a gunfight on the Jammu-Srinagar national highway after a truck carrying a group of terrorists was intercepted by security forces on the outskirts of Jammu city on Thursday, top police officials said.

The terrorists had come to execute a “big plan”, said Mukesh Singh, Inspector General of Police (IGP), Jammu. The Lieutenant Governor, who was flanked by Atal Dulloo, Adviser and Financial Commissioner, Health and Medical Education, during his visit to Government Medical College, complimented the injured policemen for their bravery and assured them of all possible assistance.

He hailed the valour and quick reaction of the security forces in foiling the nefarious design of the terrorists. “I salute the exemplary courage and bravery displayed by our forces. The nation is proud of your professionalism and commitment to protect its sovereignty and integrity,” the Lt Governor said.

Sinha said the administration and security forces were working day and night to lay the foundation of a progressive and peaceful future for the people of Jammu and Kashmir. “No outside force can derail us from our mission of peace and progress,” he said.