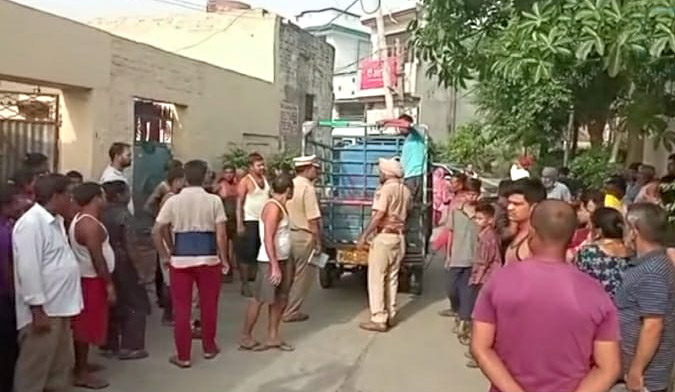 Police at the site of where LPG cylinder gas pipe leakage led to death of three members of the family.

A few days ago, Rajkumar (in his 30s) and his family members, including two children, came back to the city from their native village in Bihar. They were living in a small quarter at Lamma Pind. Today, no member of the family is alive with the exception of Rajkumar’s wife, who is battling for life.

Around 7 in the morning, three of the four family members, including one and five-year-olds, lost their lives due to the fire caused by LPG cylinder gas pipe leakage. The police said they were informed about the incident through a mobile call in the morning. “They did not know that the gas pipe was leaking throughout the night and in the morning when they lighted the gas stove, it caused fire and Rajkumar along with his two children was killed on the spot,” a police official said.

An officer present on the spot said the incident could have been avoided if there was a little awareness among the family members. He said the family failed to detect from the gas smell that something was wrong with the LPG cylinder and they did not adopt alertness and lost their lives.

District Fire Officer Jaswant Singh said this was the first such case in his service of 25 years where a family was finished within seconds due to gas leak. “When I reached the spot, I was shocked and sad. They hardly had anything. There was no possession except the gas stove which caught fire and led to the death of the toddler and his father. The room was filled with gas that proved a hurdle in carrying out the fire extinguish operation,” he said. Surprisingly, adjacent quarters did not catch fire. Police officials said their neighbours had warned him of LPG-like smell, but he did not pay heed to it.

The SHO, Rama Mandi, said, “The family had arrived here two to three days ago from Bihar.”