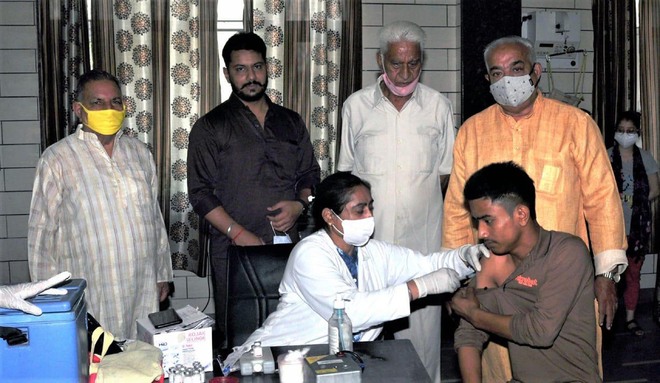 The Apahaj Ashram (old age home), on Sunday, held another camp to vaccinate the 18-plus inmates and staff members of their ashram.

The Apahaj Ashram (old age home), on Sunday, held another camp to vaccinate the 18-plus inmates and staff members of their ashram.

The ashram is the only special home in Jalandhar to host free vaccination camps for their inmates. As many as 200 people were vaccinated at the camp. While some of them were inmates and staff members, the rest were outsiders or neighbours in the 18-44 age group who came to get themselves vaccinated after word spread about the free camp.

Vaccination camps are being held as per requests received from various organisations and ashrams. We have allowed to hold camps at the Apahaj Ashram & Nari Niketan so far.

Tarsem Kapoor, chairman, Apahaj Ashram, said, “We urged the DC to allow us to vaccinate our inmates and he obliged. We are very thankful to him for that. On April 5, a camp for elderly inmates was also held at the ashram during which 150 to 155 inmates were administered the vaccine.

However, some of our members in the 18-plus category are yet to be vaccinated as many people from the neighbourhood came to get themselves inoculated after they heard about the free camp. Of about 200 inmates, nearly 160 to 170 have been vaccinated while we would try to organise the camps for the rest soon again.”

The ashram has also taken the initiative to bring the staff in their own ambulances.

The ashram provides free installation and concentrators to Covid-positive people. At present, of the 11 oxygen concentrators donated to the ashram, nine are being used by various families.

Special camps for persons with disabilities

Besides, the dedicated camps are being held at shelter homes on special request. The only body catering to special camps for persons with disbilities (PwDs) is Chanan Association, which has organised four camps so far for people in the 18-44 age group. Both PwDs and their caregivers are being vaccinated at the camps.

As many as 750 people have been vaccinated at Chanan Association Camps so far. However, these camps do not cater to shelter homes or ashrams but to individuals from specially-abled sector who are to know of camps through word of mouth or social media and then register online.

Amarjit Anand, state coordinator, PWD vaccines, and president, Chanan Association, said, “We are carrying out registrations of PWDs and their caregivers through an online Google form specially registered by us. Three camps have been held at Chanan Association Vocational Centre at Wadala and one at the Guru Gobind Singh Avenue. Of the 750 people vaccinated, only 30 per cent are PWDs while rest are caregivers.”