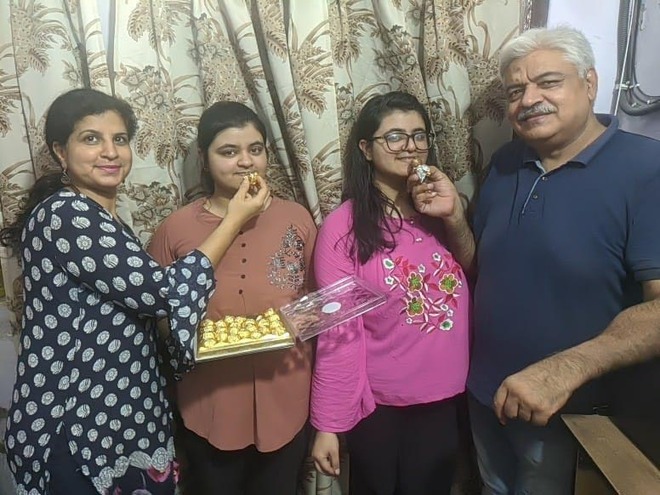 Twin girls from the city —Shruti and Surabhi — have scored almost a similar percentage of marks — 96 per cent and 95.2 per cent — respectively in the CBSE Class XII result declared today.

Both the girls are the students of MGN Public School, Adarsh Nagar. While Shruti was a commerce student, Surabhi had opted for both biology and mathematics. Shruti said she expected to score this much, while Surabhi says she was not really sure of her result as she did not score well in her pre-boards.

Their mother Mamta Chawla, who is a teacher in the same school, says, “My both daughters worked really hard and have made me proud. She said for them, being together has always been a way of life. They have so far had a similar journey throughout. Both studied in St Joseph’s Convent School and passed their Class X from the ICSE board. Despite different streams, both had three common subjects — English, painting and mathematics. They also studied together in these subjects, helping each other in their problems like the best of friends.”

Shruti and Surabhi said they wanted to continue their higher education in the same institute. “We are trying to get admission in Delhi University. I can opt for BCom, BBA or BA economics or any such stream, while my sister plans to join BSc or BA English (honours) in the same university.”

Surabhi adds, “Our elder brother Rishab Chawla, who too studied from here and remained a topper and has been our mentor. He also studied from DU and is now working in an MNC in Delhi.”