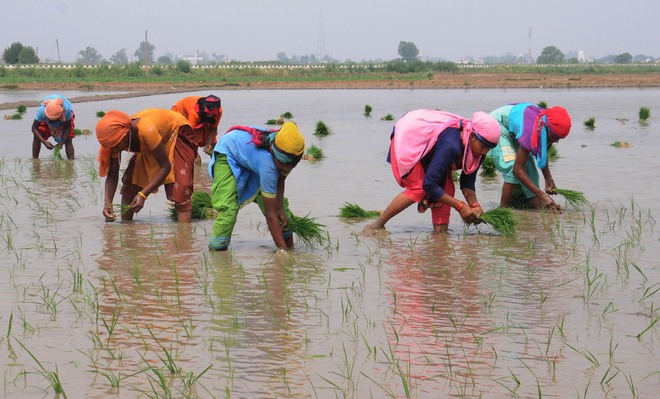 Despite promise of an uninterrupted electricity supply of eight hours by the state government, farmers across villages in Jalandhar and its neighbourhood complained of hefty power cuts. Tribune file

A week ago, several farmers of Kapurthala loaded transformers onto a trolley and then held a dharna at the Khaira Dona Feeder, exhorting the Electricity Department to keep their transformers with them as they were of no use to them in the peak of summers amid paddy season.

Despite promise of an uninterrupted electricity supply of eight hours, farmers across villages in Jalandhar and its neighbourhood complained of hefty power cuts which are leaving their fields with only four to five hours of electricity supply per day. Across the rural areas in the district and its periphery, farmers have been reporting a paucity of electricity in the middle of the paddy season which is giving them a hard time.

The 2019 floods affected the Lohian-Shahkot belt, made things worse for the farmers here. Their fields continue to get polluted water after the floods.

Salwinder Singh, a farmer of the Jania village in Shahkot, said: “Ik sada pani peen yog nahi te utton bijli puri nahi mildi. Across the Buddhanwala, Baupur, Bagga, Raiwal, Jamsher among others feeders across Shahkot farmers have been hit due to paucity of power supply. We have spoken to the SDO and SDM today as well. We get electricity for only four to five hours a day, in Lohian too. After the 2019 floods, the waters of the villages got polluted. We are getting chemical-laced water supply in the village. Bores have to be dug deeper. It is not even potable. At home, we have ROs but in fields, people are forced to drink contaminated water only. Poor farmers are worse off.”

Tarsem Singh, a farmer from Gyanpur village near Sultanpur Lodhi Kapurthala said: “What would we do without water? Power cuts are understandable if the weather conditions are adverse. But even during normal days, we are facing power cuts for two to three hours. Our village gets power from the Jhal Laiwal feeder. Despite eight hours promised on record, we only get four to five hours of electricity. We have held various morchas. While residential areas are getting supplies, it’s the fields and motors which are facing cuts during the peak paddy season.”

Amanjot Singh, a farmer from Jandiala said: “Ideally, the government should have ensured a hassle-free power supply. We got regular supply for the first 10 days of the paddy season. But later, electricity supply became more erratic. Diesel is Rs 100 per litre. Poor farmers can’t even afford generators. Two hours of running generator per day is costing farmers too much. The Pandori feeder hardly gives power for six hours a day.”

Deputy Chief Engineer, Kapurthala Circle, Inder Pal Singh said, “An electricity supply of around eight hours has been ensured to farmers in Jandiala in the past 24 hours. In other villages as well, power supply is being ensured on a priority basis. There have been very little cuts except in an emergency.