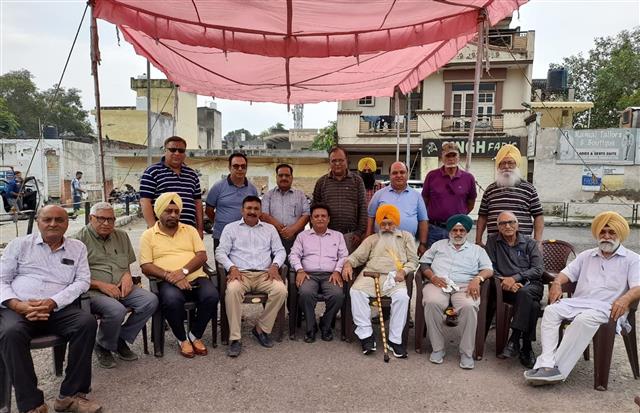 Residents of Model Town stage a dharna against the setting up of dump in the locality. Tribune photo

The long-pending issue of shifting of the garbage dump from the Model Town area was again raised today by residents but in a different manner. Area councillor Balraj Thakur joined them and they did not let anyone throw waste in the area. The residents along with the councillor have arranged for cleaning of the dump.

Now, the dharna would continue outside the area and no matter what, the waste would not be allowed to be thrown at the site, said the residents.

Thakur said now they would utilise the area for parking so that the message went out loud and clear. “We are not going to stop. The residents have suffered much. Now, cleaning has started and people will park their vehicles,” Thakur added. He said he had called the MC Commissioner today but he didn’t attend the call. “It’s a very old problem which no authority was looking into. But they have taken enough, not anymore,” the councillor said.

Residents of several colonies adjoining the Model Town area, under the banner ‘Joint Action Committee’, had raised this issue of shifting of the garbage dump from their locality. They had said they had been requesting officials concerned to resolve the issue for years, but to no avail.

Jaswinder Singh Raja, a member of the committee, said: “Come to the place, and no one will be able to stand for even five minutes. An unbearable stench emanates from the area all the time, and reptile, mosquitoes and other insects have made the situation worse.