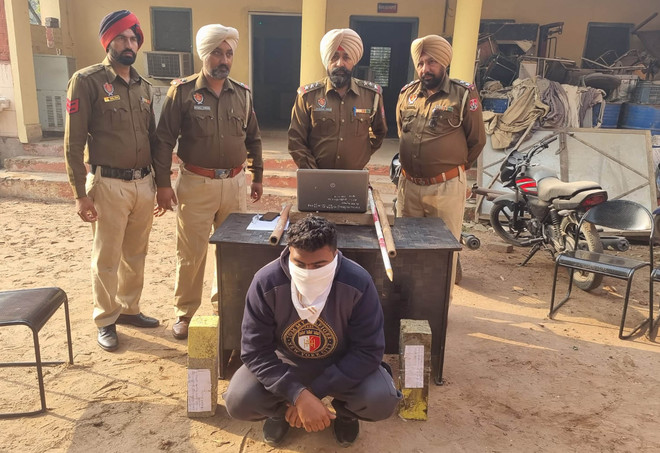 The accused in police custody in Kapurthala. Tribune Photo

The Kapurthala police today cracked the murder of a surveyor by arresting two members of a gang that shot him dead in Ibban village recently.

SSP Harkamalpreet Singh Khakh said on November 20, the police received information that some assailants opened fire on Balwinder Singh of Kot Dharam Chand village, Tarn Taran. He was working as a surveyor with Land Mark Infra Company in Ibban. Afterwards, they took away his Mahindra Bolero vehicle (bearing registration no PB 46 AG 1777).

The accused have been identified as Sukhwinder Singh Sukha (25) and Lovepreet Singh of Ibban village. One of their accomplices, Harkrishan Singh, alias Monu, from Dhapai village, is still at large.

Addressing a press conference, Senior Superintendent of Police (SSP) Harkamalpreet Singh Khakh said on November 20, the police received information that some assailants opened fire on the surveyor, Balwinder Singh, of Kot Dharam Chand village, Tarn Taran. He was working as a surveyor with Land Mark Infra Company in Ibban. Afterwards, they took away his Mahindra Bolero vehicle (bearing registration no PB 46 AG 1777).

Balwinder (30) was carrying out a survey for the land to be acquired under the Delhi-Katra Expressway along with his team.

Khakh said on the day of the ill-fated incident, the accused asked Balwinder to give the keys of his vehicle. On his refusal, the accused pumped three bullets into the victim and took away his vehicle from the spot.

The SSP said in this regard, a case was registered against the accused under Sections 302, 379-B and 34 of the IPC at the Sadar police station, Kapurthala, on the statement of an eyewitness, Gurvinder Singh, brother of deceased Balwinder Singh.

The SSP said police teams were formed under the supervision of the DSP, Kapurthala, Surinder Singh, and Sadar SHO Inspector Gurdial Singh to nab the accused and following a tip-off, the teams arrested accused Sukhwinder Singh Sukha from the Raajapur bus stand, who was trying to escape from the police as well as Lovepreet Singh.

During the preliminary interrogation, Sukhwinder and Lovepreet confessed to the crime. They told the police that on November 20, at around 10 am, Monu called them to go to Bhetan village to settle score with some boys who had damaged his car. Both went to Monu’s house, parked their bike and headed towards Nathuchal Road in his car.

Monu gave them a pistol in the car. When they reached the Dhandla village bridge, their vehicle collided with a Maruti Zen car, moving ahead of them. Later, Monu started a fight with the driver of the car but they left the spot when people began to gather on the spot, the accused said.

He said the trio left their vehicle after it developed a technical fault. Later, they later forcibly took away a motorcycle from a boy near a sweetmeat shop at gunpoint and reached Ibban on the bike. At the village, Balwinder was standing near the Bolero vehicle. Monu asked him to give the keys of the car but he refused following which he opened fire on him and took away his vehicle. After the incident, he and Monu went to Amritsar in Bolero and Lovepreet went on the motorcycle.

The SSP said due to high alert, the trio separated from each other. Monu took away the Bolero and weapons with him and Sukhwinder took the laptop and Lovepreet went away on the motorcycle, taken away forcibly from the victim.

The SSP said the police had recovered a laptop from the spot as information given by the accused.

He said the arrested accused would be produced before the Magistrate.