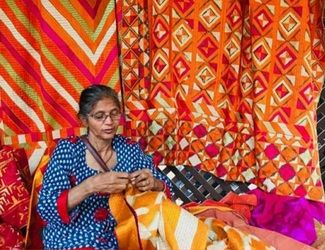 Having learnt the art of phulkari from her maternal grandmother at just five or six, Lajwanti (64), a resident of Tripuri town in Patiala, is now spreading it throughout the country. The Padma Shri awardee’s artwork is much sought-after abroad, but she seeks Punjab government’s help for artists in her trade.

Lajwanti’s family brought the traditional artwork along while migrating from the area of Multan, Pakistan, at the time of Partition. She says, “I have been doing it since childhood. Odon shaunk hunda si (It was out of interest.) And then my children, including two sons and three daughters, also joined me. They have also been conferred national awards. Together, we have taught thousands of women across Punjab, Haryana, Uttar Pradesh and Bihar. Now they are teaching others and helping them.”

Her family knows how to make cloth, stitch, embroider and all kinds of phulkari work, including Bagh, Sainchi, Chope and Subhar! She adds, “Years ago the art started going downhill. The artists were paid very less. But thanks to the Central Government’s efforts, we have been able to help many women earn for themselves. Now they can earn a decent living out of it.”

Lajwanti says her work also goes abroad, “We get orders from NRIs and we send them the phulkari. It has become a viable business for artists, especially from poor backgrounds.”