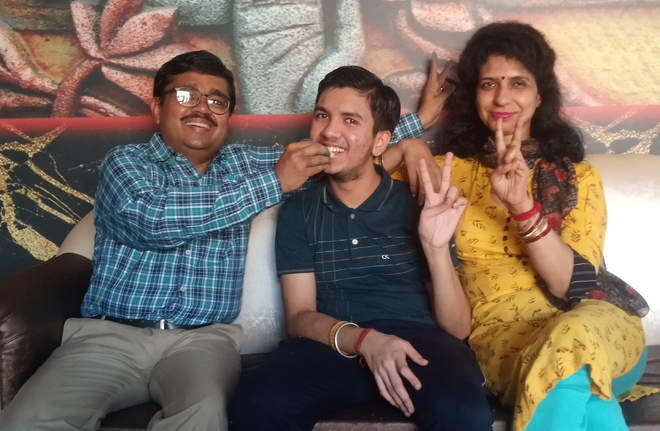 Kanav Singla celebrates with his parents after the declaration of the results of the JEE-Advanced 2021 exam in Ludhiana. Tribune photo

City boys Khushang Singla and Kanav Singla excelled by achieving All India Rank (AIR) 30 and 315, respectively, in the JEE-Advanced 2021 exam. The result of the examination was declared on Friday.

A resident of the Asha Puri area of Ludhiana, Khushang Singla had been studying in Panchkula and Chandigarh for the past two years.

After passing out Class X from a city school, Khushang passed Class XII from Bhavan Vidyalaya, Panchkula, with 97.4 per cent marks and was preparing for JEE-Advanced exam in Chandigarh. He likes to play badminton.

A resident of Sector 39, Jamalpur, in Ludhiana, Kanav Singla, who achieved AIR 315 in the JEE-Advanced 2021 exam, said he wants to study computer science engineering. He will seek admission to the IIT-Roorkee now.

Kanav had earlier achieved All India Rank (AIR) 42 in JEE-Mains exam. In his first attempt for the JEE-Mains examination, he had obtained 99.998 percentile. He said he was focusing on daily assignments and homework for the preparation of the exam. He likes to play cricket.

He has passed Class 12 in the non-medical stream with 97 per cent marks from BCM Arya Model School, Shastri Nagar, Ludhiana. Kanav’s brother Shrey Singla is studying computer science at IIT-Bombay. His father Dr Ravi Kant Singla is a physician and his mother Dr Anju Singla is an anaesthesiologist.