3 arrested with habit-forming drugs in Ludhiana 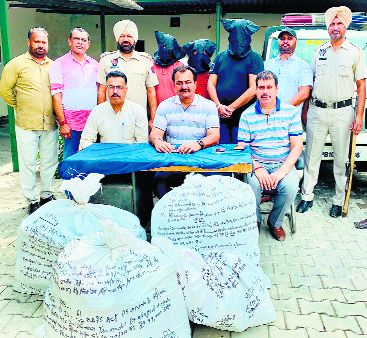 The accused in police custody in Ludhiana on Tuesday. Tribune photo

A joint team of the Counter-Intelligence and Crime Branch-II of the city police today struck a big haul of habit-forming and intoxicating drugs with the seizure of more than 1.93 lakh tablets and capsules and arrest of three persons from EWS Colony on the Ludhiana-Chandigarh road.

The trio were travelling in a Honda City car (PB-10FG-8223). The arrested persons have been identified as Punet Malik, resident of Chhawni Mohalla, Ajay Goyal, resident of Chander Nagar in Civil Lines, and Sonu Chhabra, resident of New Model Town.

The police said the trio, who have been charged under Sections 22-C, 61 and 85 of the NDPS Act, revealed during preliminary interrogation that they used to purchase these drugs from other states at cheaper rates and sell them at higher prices to medical stores and addicts. Two of the accused, Puneet Malik and Ajay Goyal, had been booked under the NDPS Act earlier too and both had come out of jail on bail and parole in November 2019 and June 2020, respectively. The third accused, Sonu Chhabra, has a medical store near Midda Chowk and purportedly the name of his shop was being used for the purchase of habit-forming drugs from the manufacturers. —OC