Congress holds fort with 8 of 14 seats in Ludhiana district 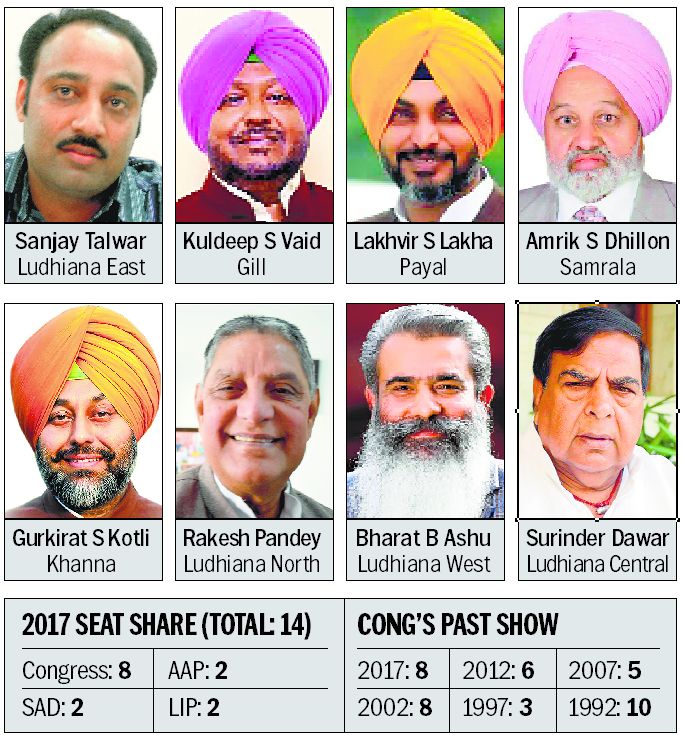 Ludhiana, the state’s biggest and largest district, in terms of area and population, which sends 14 MLAs, highest number from any district, that account for almost 12 per cent of the total 117 legislators in the state, gave eight seats to the Congress in the 2017 Assembly elections when the ruling party’s 77 MLAs were elected.

While the principal opposition Aam Aadmi Party (AAP) could win only two seats, the rest two seats each went to the Shiromani Akali Dal (SAD) and the Lok Insaaf Party (LIP), represented by the local Bains brothers — Simarjit Singh and Balwinder Singh.

With the 2022 Vidhan Sabha elections almost a month away, the ruling party faces an uphill task to retain its second best show in Ludhiana district in the past six Assembly polls.

As Ludhiana, one of the major parts of the state’s Malwa region, located south to the Sutlej, which makes up majority of the Punjab region consisting 12 of the total 23 districts, braces itself for a five-cornered contest amidst high hopes, big promises, and long-pending demands, the Congress will be facing a major challenge from not only its traditional rivals — SAD with its new ally Bahujan Samaj Party (BSP), AAP, and LIP – but also the newly-formed two farmers’ outfits — the Sanyukt Samaj Morcha (SSM), comprising 19 farm unions, including the one led by Balbir Singh Rajewal, and the Sanyukt Sangharsh Party (SSP) formed by a Haryana farm leader, Gurnam Singh Charuni, and a new-found alliance between the Bharatiya Janata Party (BJP), Shiromani Akali Dal (Sanyukt) led by Sukhdev Singh Dhindsa and the former Chief Minister Capt Amarinder Singh’s Punjab Lok Congress (PLC) during the February 14 Assembly elections, which will be held in the backdrop of the recently suspended year-long stir against the three controversial farm laws.

Besides the anti-incumbency factor, the intense infighting and leadership crisis, non-fulfillment of several promises made by it in the previous polls, rising unemployment and dire state of trade and industry were among the major issues that the ruling party faces in these elections.

However, the Congress leaders, while sounding confident of the 2017-repeat in 2022, claimed that the change of guard ahead of the forthcoming elections had improved the party’s prospects.

Of the total eight sitting Congress MLAs in the district, Bharat Bhushan Ashu, who is a Cabinet Minister, had recorded the district’s highest victory margin of 36,521 votes from Ludhiana West in the 2017 Vidhan Sabha polls, while the ruling party MLA from Ludhiana East Sanjay Talwar had won with the thinnest winning difference of 1,581 votes in the district.

Among other Congress legislators from Ludhiana, Gurkirat Singh Kotli, who is Industries Minister, had won from Khanna with a margin of 20,591 votes, Amrik Singh Dhillon from Samrala with 11,005 votes, Surinder Kumar Dawar from Ludhiana Central with 20,480 votes, Rakesh Pandey from Ludhiana North with 5,132 votes, Kuldeep Singh Vaid from Gill with 8,641 votes, and Lakhvir Singh Lakha from Payal by a margin of 21,496 votes.

Till 2007, Ludhiana district had 12 Vidhan Sabha constituencies but following the delimitation in 2009, the number of seats went up to 14 since the 2012 Assembly polls.