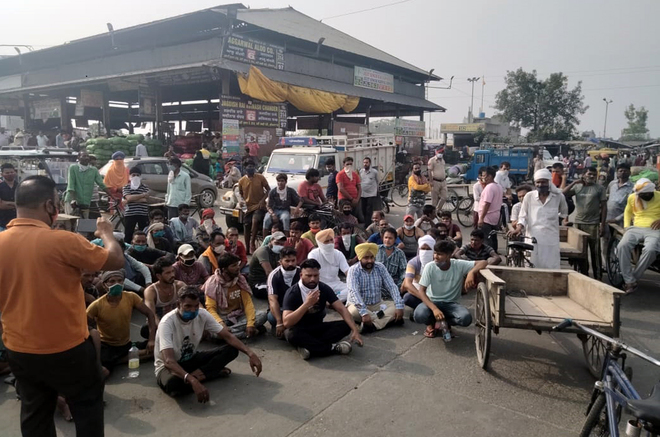 Cart owners stage a protest against a contractor at a sabzi mandi in Ludhiana. Himanshu Mahajan

Cart-pullers/owners, who transport vegetables and fruits at sabzi mandi near Jalandhar Bypass, today staged a protest against a private contractor for allegedly fleecing them.

A former councillor of the Lok Insaaf Party, Randhir Singh Sibia, also supported the protesters and demanded from the Punjab Mandi Board to take immediate steps to stop fleecing of the cart-pullers and other visitors at the sabzi mandi.

Sibia said: “The cart-pullers transport vegetables from inside the Sabzi Mandi to the road outside the mandi gate to meet their daily needs but the private contractor charges Rs 20 every time from them. The authorities concerned had turned a blind eye over the violations due to which the cart owners are being exploited. Thus, the cart owners were forced to mark protest at the mandi today. A fee should be collected only one time daily.”

Sibia added: “The contractor has been violating the rules under the nose of the administration. An entry fee is also being charged from bike riders and cyclists who purchase vegetables from inside the mandi. The contractor also charges fee from pedestrians if they have two bags of vegetables. The government and Punjab Mandi Board officials have failed to keep a check on the violations at the mandi.”

Punjab Mandi Board officials also reached the protest site to resolve the matter between the cart owners and the contractor. The District Mandi Officer, Davinder Singh, said, “The matter has been resolved. The contractor has been asked to follow the guidelines.”

He, however, denied the allegations about fleecing of visitors. He said, “The contractor can’t charge any fee for the two-wheelers. I have also inspected the sabzi mandi but the contractor was not found charging any fee from two-wheelers.”