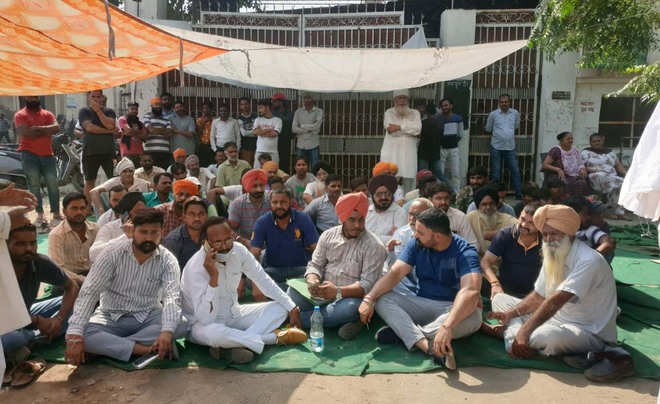 Residents of Dhandari Khurd, falling in Ward 28 (Zone-B), today staged a dharna in protest against the menace of overflowing toxic waste from sewer lines, which had made their lives miserable.

The protesting residents were sore over the apathy of officials of the Municipal Corporation in dealing with the problem which was posing a huge threat to public health and hygiene of the residents – mostly industrial workers and daily wagers, who could not afford expensive medical care.

Area councillor Paramjit Singh Garcha (SAD), who led the dharna in front of one of the dyeing units in the area, said toxic effluents are discharged directly into sewer lines by a couple of dyeing units located in the vicinity and as a result, overflowing waste toxic water from sewer lines either kept stagnating in lanes and markets, or at times enters shops and houses causing immense damage.

Other area residents lamented that repeated representations made to the officials of the operations and maintenance (O&M) branch of the MC evoked no response and rather than coming to the rescue of suffering residents, the MC officials issued a diktat to stop cleaning of sewer lines with suction machines in the area. which further compounded the problem.

Garcha indicated political bias among elected representatives and officials in the Congress-led civic body against the wards represented by councillors from opposition parties. He, however, asserted that the ward being extremely underdeveloped is being ignored for allotment of funds for development works and delivery of basic amenities.

Superintending Engineer (O&M), MC, Rajinder Singh said a couple of dyeing units located in the area are permitted to discharge their effluents into sewer lines and the problem of overflowing of sewer lines is due to a snag in pumping motors used for drainage of waste water to treatment plant.

“This is a temporary problem which is being taken care of and the situation would improve in the next couple of days. Besides, the common effluent treatment plant (CETP), being installed by dyeing units, is also expected to become operational in about a fortnight and the problem of overflowing sewers and toxic waste would be permanently solved,” he added.